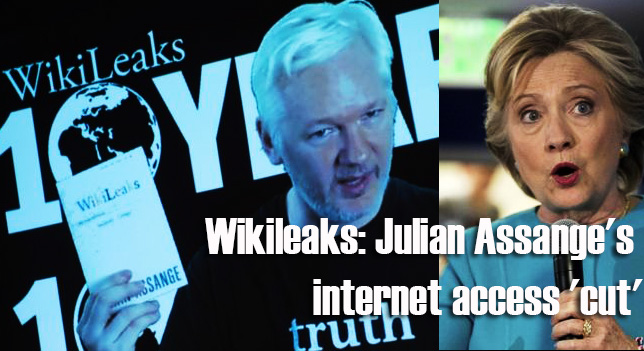 Wikileaks says that Ecuador has shut down internet access for its founder Julian Assange on 15th October Saturday 2016 at 5:00 GMT. He has sought asylum at London’s Ecuadorean embassy since 2012 to avoid extradition over sex assault allegations.

Wikileaks has recently released a new batch of hacked emails from the account of Hillary Clinton’s campaign boss. The website says it will release tens of thousands more emails between now and Election Day next month.

Clinton campaign chairman John Podesta, whose emails was hacked, has claimed the Russian government was behind the leak. The sensitive email leaks are as follows: –

“The Clintons won’t forget what their friends have done for them,” future Clinton campaign manager Robby Mook wrote in the November 2014 email to Mr Podesta.

According to the latest leaked emails, Mrs Clinton told a Goldman Sachs conference she would like to intervene secretly in Syria.

“My view was you intervene as covertly as is possible for Americans to intervene,” she told employees of the bank in South Carolina, which had paid her about $225,000 to give a speech.

Mrs Clinton – who is accused of being a war hawk by liberal critics – added: “We used to be much better at this than we are now. Now, you know, everybody can’t help themselves.

“They have to go out and tell their friendly reporters and somebody else: Look what we’re doing and I want credit for it.”

Mrs Clinton said in emails that she had told Chinese officials if they were not able or willing to control North Korea’s aggression then the US would be forced to put up missile defenses in the region.

“So China, come on. You either control them or we’re going to have to defend against them,” she purportedly told a Goldman Sachs conference in June 2013.

Mr Halpin, a self-described Catholic, writes that many of the “most powerful elements of the conservative movement are Catholics… they must be attracted to the systematic thought and [severely] backwards gender relations”, adding that “it’s an amazing bastardisation of the faith”.

In excerpts from one of Mrs Clinton’s paid speeches to Wall Street bankers, she said: “Politics is like sausage being made. It is unsavory, and it always has been that way, but we usually end up where we need to be.

“But if everybody’s watching, you know, all of the back room discussions and the deals, you know, then people get a little nervous, to say the least. So, you need both a public and a private position.”

Donna Brazile, the former CNN contributor, notified the Clinton campaign in advance of a question she would be asked at a town hall-style event hosted by the cable network in March, according to the leaked emails.

“From time to time I get the questions in advance,” Ms Brazile, now chair of the Democratic National Party (DNC), wrote in the subject line of a 12 March email to Clinton aides.

Clinton spokesman Brian Fallon wrote in a May 2015 email: “DOJ folks inform me there is a status hearing in this case this morning.”

He was referring to a Freedom of Information Act request by a journalist seeking disclosure of Mrs Clinton’s emails from her time as the secretary of state.

Mr Fallon, who is a former Department of Justice spokesman, was relaying information that was already publicly available and being reported by multiple news outlets.

In a leaked 2013 paid speech to the Jewish United Fund of Metropolitan Chicago, Mrs Clinton said that Jordan and Turkey “can’t possibly vet all those refugees so they don’t know if, you know, jihadists are coming in along with legitimate refugees”.

Trump supporters seized on these remarks to criticise her call for the US to accept 65,000 refugees per year, an increase on President Obama’s plan to allow 10,000 per year.

Mrs Clinton’s newfound opposition to trade deals contradicts remarks she made in a 2013 paid speech to Brazilian bank Banco Itau.

She said: “My dream is a hemispheric common market, with open trade and open borders, some time in the future with energy that is as green and sustainable as we can get it, powering growth and opportunity for every person in the hemisphere.”

Several Clinton aides discuss what political opinion their candidate should take on the controversial energy pipeline known as Keystone XL.

In May 2015 Clinton campaign manager Robby Mook pointed to a report that the Clinton Foundation had received money from one of the project’s backers, emailing that “the enviros may latch onto this going forward. Have we discussed when she will come out against Keystone?”

Doug Band, a long-time personal aide to Bill Clinton, complained that Chelsea Clinton was meddling in his consulting firm, where the former president served as a paid adviser, and also interfering with his work at the Clinton Foundation.

In a 2011 email, he wrote “she is acting like a spoiled brat kid who has nothing else to do but create issues to justify what she’s doing because she, as she has said, hasn’t found her way and has a lack of focus in her life”.

That’s the subject line of an August 2015 email sent by Mr Podesta to Hillary Clinton and one her closest aides, Huma Abedin.