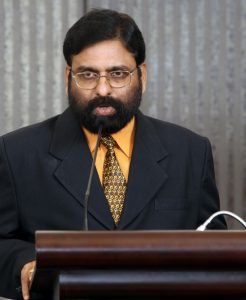 I am very happy to be here once again to deliver on Arthashastra of Kautilya. I cordially welcome you all. It was during 2005 I was invited by Dr. Ramachandran to introduce my research work on Arthashastra which I had then submitted to Kerala Sahithya Academy. After a decade I was again invited for introducing my latest research work “Kautilya Unleashed” printed and published by Partridge, A penguin Random Company, United Kingdom. I express my heartiest gratitude to Dr. Sabu Philip and Dr. Sukumaran for this covetable honour.

When I am appearing before you now, there are two remarkable questions of which, answers bring big happiness in my career as a writer. The questions; why I wrote one more work on Arthashastra? Why these works are inspiring the academicians of this institution? I believe that Goddess of learning has reverently blessed me, my book and this institution profoundly and that’s my answers to the questions. “Kautilya Unleashed” is my eighth work which has its own reasons to be proud of. It is my first work in English and secondly it is the work that honoured by Penguin, United Kingdom. 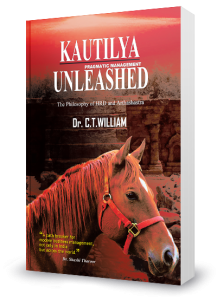 “Kautilya Unleashed” is the fruitful effort of my decadal intellectual meditation and research exercise. I hope that the effort will continue. I am sure that this work will energize and inspire the readers to work for the re-building of the self, society, state and the world. The book I hope will attract more readers and be an essential guide to the global citizen. Compared to other books of its kind, it is the simplified version of management philosophy that the students of management and the general readers could easily follow and encapsulate.

It is my unquenchable thirst for translating the pragmatic philosophy for the common man that resulted in the writing of the book. The practical philosophy I invented and got inspired is the Philosophy of Human Resource Development that inherent in the great Indian classic Arthashastra of Kautilya-the cosmic guru, the father of management, who wrote the Bible of Administration and Management.The core philosophy of Arthashastra of Kautilya is the ever-acclaimed Indian philosophy Prithvilabham and Prithvipalanam. While equating with the terminology of management, we could synonymize Prithvilabham to Acquisition of resources and Prithvipalanam to Retention of resources. We know that the three enabling factors of Human Resource Development (HRD) are; a). Acquire or sharpen the capabilities, b). Developing of general capabilities, and c). Developing of organizational culture. According to Arthashastra of Kautilya these three factors are termed as Prithvilabham, i.e. Acquisition of capabilities Yogakshema, i.e. Development of capabilities and Attainment of Yogakshema-A welfare state Prithvipalanam , i.e. Development of organizational culture- Retention of Yogakshema. As a result of this HRD administration, the salary scale of the right people is fixed so as to enable their Physical as well as the meta-physical needs in consonance with the principles of Dharma and Artha, the two out of four constituents of Purushartha.

Arthashastra of Kautilya emphasizes more on the duties and responsibilities of people rather than chartering on the rights and privileges of the people. The three-fold duties as Kautilya put forth are 1). Rakshana i,e, Protection of the state, 2). Palana i,e, Maintenance of law and order, 3). Yogakshema i,e, safeguarding the welfare of the state. The duty of the king or the ruler; the people or the ruled is, to forecast the misfortune, to prevent the misfortune and to ensure the welfare and prosperity of the state and its people. It might be either sensitive or paradoxical to comment that, ours is a society more concerned with the rights and privileges rather than the duties or responsibilities. In such a right-conscious society, the implementation of the principles of Arthashastra will be precariously dubious. But Kautilya made it workable on the five-fold strategies i.e. the Panchatantra he designed. They are: – 1). Chakravarti, Centralized monarchy, 2). Purushartha, Spiritual civil code 3). Dhandaneethi, the law of administration 4). Nigraha, Annihilation of enemy, 5). Prithvi, Free from religious fundamentalism. Applying these strategies, the source and acquisition of Artha (Territory, Resources and people) are ensured and retained. This science of wealth and welfare is known as Arthashastra.
The science of wealth and welfare or the science of administration in the broadest sense is comprised of three sciences or shastras known as Anweeshiki (Philosophy), Thrayi (Three Vedas) and Vartha (Economics). These tri-factors are exercised on the strong basis of Purushartha (Dharma, Artha, Kama and Moksha) so as to attain the security and welfare of the State and People through the self-discipline of the King. This self-discipline of the King or ruler or leader based on the science of administration also reminds us Gandhian Philosophy. Because the three-fold economic activity (Vartha) consists of 1). Agriculture, 2). Animal husbandry, 3). Trade and commerce; in fact, are the basis Gandhian philosophy and economics. When a State is not conscious of these grass-root level economic activities, the State will end up with material distress and destruction. According to Kautilya only the King or Ruler or Leader could overcome these unpleasant material calamities.

The Philosophy of HRD and Arthashastra is to be discussed in this context. The creative role of human element and its decisive play in the administration is very remarkable in Arthashastra. It is highly praise-worthy that the human resources (Vishti) have been accounted for in those days while preparing the profit and loss account or the balance sheet of the state. In the wider sense we may call this as Human Resource Accounting. It is a fact that we have invented Human Resource Accounting very recently and we neither applying nor implementing this concept effectively so far. The text Naikam Chakram Paribramathi (One wheel alone does not move the chariot) implies the theory of co-ordination and the essentiality of human resource dynamism in an administrative system. The acquisition of human resource or Prakrithi on the basis of three sciences or shastras known as Anweeshiki (Philosophy), Thrayi (Three Vedas) and Vartha (Economics) is the real attainment of socialism. Prakriti Sampatha hyanayakamapi rajyam niyathe is the text that reminds us the Marxian Theory that the in the final stage “the state withers away” and the people are ruled automatically even without a ruler [Nayak]. The King or the ruler (Nayak) who is expert in all these sciences or Shastras and attains the mental state of the proper equilibrium to do good to the people is known as Rajahrishi (HRM/HRD Expert). Here Rajahrishi plays the role of a father and treats the subject as his son and a sort of Administrative Paternalism rules over the State and work for the attainment of a Welfare State (Yogakshema).
The public administration in Arthashastra is exercised through three major portfolios namely Niti (Polity), Dhanda (Administration), Prithvilabham and Prithvipalanam (Management). The Civil Servants are appointed and checked through four HR tests known as Dharmopadha, Arthopadha, Kamopadha and Bhayopadha to ascertain the essential HR qualities such as Arthasudhi, Dharmasudhi, Kamasudhi and Bhayasudhi. Dandaniti (Law of administration) is exercised through Code of Law branched as Dharmastheeyam (Civil Laws) and Kandakashodhanam (Criminal Laws). The Judges discharged their duties objectively and impartially so that they could earn the trust and affection of the people. The King never interfered either in the process or in the exercising of law and order of the State. Administrators as follows are delegated to ensure the welfare of the State; The Samahartr (Country side) Pradhesters (Fortified towns and districts) Sthanikas (Districts) Nagarikas (Cities) Gramikas (Villages) Anthapalas (Frontiers) Adavikas (Hill tribes).

Dear teachers and students, research is not the ultimate end; it is but the beginning to find out the ultimate end beyond. So I invite you to continue my research to find out the ultimate end beyond. I hope that my work will inspire and lead you to the newer end. I unleash the unconquerable spirit of Kautilya once again. I unleash the warhorse. It is the moral responsibility of the global citizen to curb the spirit of this exceptional gene and to determine the genesis of posterity and a new world of welfare. Thank you for sharing me and my book.