The Man Of Monumental Management Or Mismanagement? 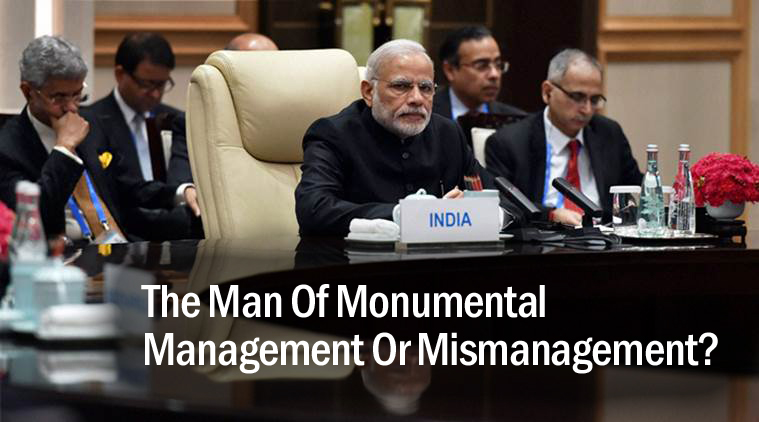 The demonetization of banknotes of Mahatma Gandhi series worth rupee 1000 and 500 in India ceased to be legal tender from 9th November 2016 through the enactment of a financial policy by the Government of India on 8th November 2016. This historic announcement was made by the Prime Minister of India Narendra Modi in an unscheduled live telecast at 20:15 IST on 8th November 2016.

Demonetization is a financial regulatory process by which coins and banknotes in country may cease to be legal tender if new notes of the same currency replace them or if a new currency is introduced replacing the former one.

It’s true that the demonetization policy was accepted by all citizens except those adversely effected having black money and corrupt activities during the first phase of the policy implementation. The citizen of the country were ready to suffer to its affordable extend for the welfare and good objectives of the country through the demonetization policy.

The former Prime Minister and renowned economist of the country, Dr. Manmohan Singh took long sixteen days to make a comment on the demonetization policy. It was on 24th November 2016; Dr. Manmohan Singh addressed the Rajya Sabha whose body language and articulations showed that Dr. Singh was re-winded a speech winded by somebody else with pressure. When we analyse the whole speech of Dr. Singh, we could feel a sincere note of acceptance of the demonetization policy with a Keynesian warning, except its “monumental mismanagement”.

Dr. Manmohan Singh’s introductory remark is; “Prime Minister has been arguing that this is the way to curb black money, to prevent growth of forfeiture currency notes and also to help in control of terrorist finance activities. I do not disagree with these objectives. But I do want to point out this that in the process of demonetization monumental mismanagement has been undertaken about which today there are no two opinions in the country as a whole. Even those who say that this measure will do harm or cause distress in the short term but be in the interests of the country in the long run should be reminded of what John Keynes said once,” In the long run all of us are dead.”

Dr. Singh concluded his speech with a sincere note of his love and concern to the common people of the country; “I sincerely hope that the Prime Minister will view that this late hour will help us to find practical, pragmatic ways and means to provide relief to the suffering of the people of this country.”

Honouring the voice of opposition, I would like to focus on the crux of the speech delivered by Dr. Manmohan Singh. Yes, the common people of the country should not suffer beyond their affordability. But I myself representing the common people say that the people’s sufferings are still within their affordability. During the first week of introducing the demonetization no doubt people suffered a little. But later on the situation was made panic by the interference of the media persons and the politicians with vested interests who are financially illiterates to address the problem intellectually and scientifically. As usual the media treated the case emotionally and sensationally to sell their product with high rating.

The panic has spread like an epidemic and people swarmed around the banks and ATM’s for siphoning out their money. People were made to believe that the country will go without currency in the nearest future. They withdrew all their money and kept in their valet unspent. The market was thus drained and exhausted. Again the media persons and the politicians with vested interests exploited the situation and artificially created further panic in the country. While media is shedding crocodile tears for the people and the media-pro politicians concerned, one should not forget the fact that the media companies and its people along with their army of advertisers and sponsors survived the situation without any problems of demonetization.

In the national level the issue of demonetization has took the other turn of beating up the Bharatiya Janata Party with the available fragile cane of relief. The opposition in India has become a useless trump card which could never be released and thrown into the playground. The giant congress party has become precariously lean and hungry throughout the country. The other parties are also suffering alike. In the context, the opposition has taken the opportunity to brand the historic demonetization policy as “monumental mismanagement”. Nothing more they have to say as the issue has stealthily turned anti BJP; but sure not anti-Modi or against the existing financial ethics and science.