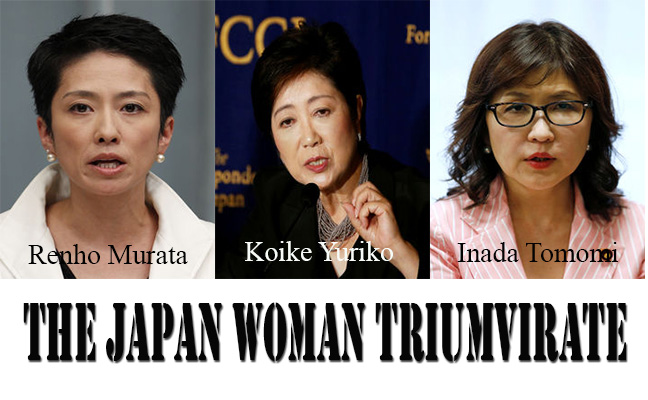 The Japan Woman Triumvirate has in recent months been appointed to politically powerful key positions in Japan.

Renho Murata the new leader of the opposition Democratic Party; Koike Yuriko the first female governor of Tokyo; and Inada Tomomi the defense minister of Japan to form the brave triumvirate.

The appointment of this Japan Woman Triumvirate to leadership positions expects a shift in the role and status of women in Japanese politics and social fabric.

The Japanese masculine political leaders are quite embarrassed about the nation’s position in global rankings of female political and economic empowerment.

Women heads of state has only 9.3% of Lower House seats are occupied by women. The state also has the second largest gender pay gap, after South Korea. Women comprise less than 2% of the nation’s mayors, less than 10% of company heads and only 18% of court judges.

The fact that Koike, Renho and Inada have reached positions of political leadership is a positive sign of change.

Tokyo’s first female governor Koike Yuriko, was a member of the long-ruling government party, the Liberal Democratic Party, and had a seat in the national legislative assembly. She was influential in the preparation of policies to better utilize women’s labour largely as a strategy of improving the economy. Her commitment to “women’s empowerment” is unquestionable. She is interested in encouraging women to participate more in the workforce and take an active part in the capitalist economy.

The defence minister, Inada Tomomi, is a close ally of Prime Minister Shinzo Abe. Both Abe and Inada are members of Japan’s powerful nationalist lobby group, Japan Conference, a vocal denier of the validity and legitimacy of “comfort women’s” claims to compensation.

Abe has faced criticism from both outside and inside Japan for his decision to appoint Inada (who was elected to the House of Representatives in September 2005) to the post of defence minister. Abe’s decision might reflect a possible desire to appease the female voting public. Japanese women are generally opposed to national involvement in war and therefore the Abe administration’s moves to revise Japan’s pacifist constitution.

When women reach politically powerful positions, especially if they are in the early stage of their careers, they run the risk of not being taken as seriously as their male counterparts, and of being open to attack. This has been noted in other countries as well, and women in Japan are no strangers to harassment and abuse at the hands of their male colleagues.

The party leader, Renho, the new leader of the Democratic Party, follows in the footsteps of the political path-breaker of Doi Takako, who led the Japan Socialist Party (JSP) when it was the main political opposition from 1986 to 1991, and again from 1996 to 2003.

Renho’s main challenge is arguably to unify her party and transform it into one that’s regarded by voters as a viable alternative to the Liberal Democratic Party.

The Japan Woman Triumvirate neither represents the majority of women nor the majority of Japanese people, when it comes to pacifism and nuclear energy; the two of the most politically significant issues in Japan today.