The Hemingway Philosophy retold in China for Dr. Li Wenliang 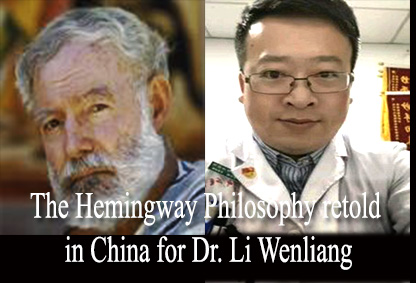 “A man can be destroyed but not defeated.” The philosophical quote from Ernest Hemingway is now reverberating in the most popular microblogging website Sina Weibo commemorating Dr Li Wenliang- the doctor-turned activist who informed the world first about the outbreak of the virus Covid-19. Millions of adorers of Dr Li, now react in Hemingway style against the Chinese Government for censoring their valuable comments in the Sina Weibo Page of Dr Li. They commented, “They can take away our comments, but they can’t take away our feelings”.

“It rained again today. It’s been raining heavily these past few days. If only you were here to see it.” This message is one of the viral posts that millions liked and shared on the Weibo page of the great Doctor-turned whistle-blower- Li Wenliang over the past few months.

Dr Li was an Ophthalmologist at a hospital in Wuhan who informed the world first about the outbreak of the lethal virus-Covid-19. He found the SARS-like virus, infected in a storekeeper from the Wuhan seafood market while treating him for Glaucoma, in December 2019. Dr Li shared the information as a private message to his fellow microbiologists and called for keeping vigilance. Later on, the city turned the epicentre of world’s coronavirus outbreak.

Dr Li’s message was virally spread online, and shortly after the Chinese government ordered for an investigation and he was penalised by the police for “spreading rumours” and told to “stop making false comments”. He was afterwards forced to submit a written apology and his mouth was shut to utter any words that imply freedom expression.

Contracted with the disease, Dr Li was isolated on 10th January 2020 and later on his condition went worse and admitted in the Wuhan Central Hospital. On 7th February Dr Li died there as a martyr at the altar of the deadly pandemic Covid-19. After his martyrdom, hundreds of thousands of people turned his Sina Weibo page into a viral web space for registering public anger and the activists even evoked their fellow citizens to “rise up”.

The messages from all walks of life – students, doctors, even public security staff flowed into the Sina Weibo expressed the deep fear and anxiety among the Chinese public. Within no time Dr Li’s Web Space has become a kaleidoscope that reflected China’s anti-people political system that assassinated the public sentiments.

Now the followers of Dr Li has equated the Sina Weibo Wall to that of the historic Wailing Wall at Jerusalem. The Wailing Wall in Jerusalem, a relic of an ancient Jews temple and at which the Jews still pray and leave prayers on paper in its cracks. Unfortunately, the Wailing Wall dedicated to Dr Li could not survive like that of the Wailing Wall in Jerusalem where it lasted for more than 2000 years. Because the Chinese Government, the assassinators of Freedom Of Expressions have deleted all expressions of public interests that appeared in the Wailing Wall of Dr Li forcibly and frequently. It was in this context, the Chinese people re-wrote the great Hemingway’s philosophy as “They can take away our comments, but they can’t take away our feelings”.