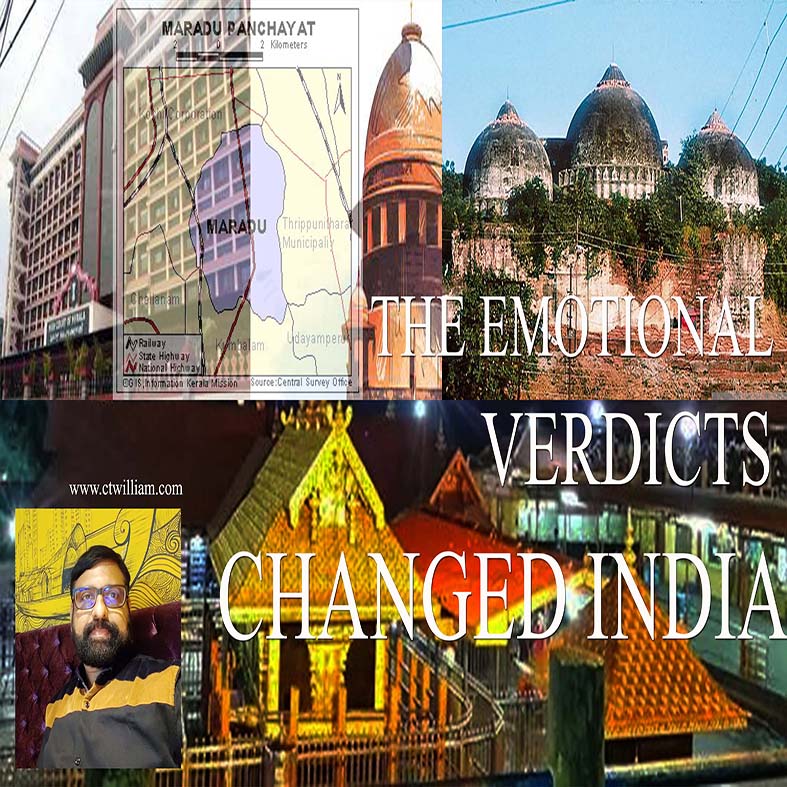 I salute the supreme court of India for the recent judgments that are justifiable more in respect of human values, culture, ethics and the honorable integrity of the nation rather than the logical equilibrium of the judiciary. In fact, the Apex Court has upheld its emotional equilibrium as well. And the credit goes to the goddess of justice that prompted the chief justices of India.

On Ecology and Environment

The first decisive pronouncement of ever-acclaimed justice during 2019 was out on the Maradu Flats illegally erected violating the existing rules and regulations that are applicable for the protection and preservation of ecologically fragile coastal areas of Kochi, Kerala.

The honorable Supreme Court has boldly directed the Government of Kerala for the total demolition of flats built on the coastal zone of Kochi’s Maradu within 138 days and also directed the Kerala government to pay Rs 25 lakh interim compensation to each flat owner within four weeks.

The apex court has also ordered for constituting a one-member committee of a retired high court judge to oversee the demolition process and to assess the prompt delivery of the total compensation. The court has further frozen the assets of irresponsible builders and promoters who were involved in the construction of illegal flats in the ecologically fragile coastal areas of Kochi, Kerala.

With grave concern over the people affected and suspecting the political gimmicks of the state government, the court has further directed the government to recover the interim compensation amount from the builders and the promoters for the immediate and prompt delivery of compensation to the people.

In the grave and foresighted context where some tools of the government machinery along with some of the factions from the media attempted to delay the execution of the judgment of the Supreme Court, the apex court has further clarified that there should not be any reason for delaying either the demolition or the retention of the flats on any ground and reminded the precedent of Kant enclave in Faridabad where the illegal structures had been demolished, and modalities of recovering the money from those responsible for such construction had been promptly exercised.

The court has in advance cautioned the spokesmen of the government who tried to play hide and seek; the bench even warned, “If you cannot do it, we will think of involving some other outside agency”, for the execution of the judgment. The apex court had further reminded that the illegal construction in coastal areas of Kerala is a “colossal loss” to the ecology and environment, and had expressed grave shock over the spate of unauthorized structures coming up all over Kerala.

No doubt, this judgment of the honorable Supreme Court has become an eye-opener verdict to clarion the relevance of ecology and the environment of the nation.

On Sabarimala, the sacred pilgrim mountain

Sabarimala, the sacred pilgrim mountain in Kerala is under focus for the last few years due to the lack of clarity on the issue of whether women of all ages could be allowed to come to Sabarimala. Keeping the sanctity of the shrine observing the Ritualistic Celibacy or Nishtika Brahmacharya of the Lord Ayyappa, only the women aged up to five and above fifty are allowed to enter the Sabarimala, Mountain. Hot arguments have arisen from various quarters of the society that there is a lack of clarity in the Supreme Court verdict pronounced earlier.

It was during September 2018, the five-member the constitution bench had passed a historic verdict, observing gender equality allowing women of all ages to come to Sabarimala. The verdict have sparked to burn the issue and as a result, violent agitations were organized by religious leaders and fanatics that had fumed and fired all over Kerala. In the midst of agitations and protests, women were challenged and some of them entered the shrine amidst wide protest with the help of government machinery under the shade of executing the verdict of the honorable Apex Court.

There were grave incidents that had erupted the religious, communal and political harmony of the state and consequently the State-Ruled CPIM party has to sacrifice a lot in their state political career and they even lost some of the bye-elections and the other local electorates. Accordingly, there arose as many as 65 petitions, including 56 review petitions and all were filed by the concerned against the verdict.

After an interval of about one year, in 2019, the honorable Supreme Court has once again proved its judicial mettle and justice to uphold the religious, communal and even the political harmony of the state and nation as a whole.

The Chief Justice said that the Supreme Court should evolve a common policy on religious places such as Sabarimala, and also indicated that Sabarimala should be considered along with the question of the entry of Muslim women in mosques, the restriction of entry to fire temples for Parsi women who married outside their community, and also with the female genital mutilation in the Dawoodi Bohra community.

By pointing out that gender discrimination and equal right to worship of women found in other religions, the Apex Court in the process of making a broad and reasonable interpretation on such an issue in a secular state reached a conclusion that ‘there could not be any selective focussing on any particular religion’; the Chief Justice observed.

Sabarimala, in the Fading Light of Constitutional Values, the Chief Justice viewed that the said restriction on the entry of menstruating women in Sabarimala is not an age-old custom but a practice imposed by some vested interests at some point of time; a few decades ago. And the practice is continuing without any supporting evidence either in the religious rituals or scriptures. These gender discriminations were religious taboos and in a true secular republic, such taboos are questionable.

The Chief Justice found some of the constitutional aspects in this regard vague and therein emerged seven questions in the judicial frame and for the same reason directed that a larger seven-member bench will be constituted to study and decide on those questions framed; mainly on whether the court should intervene in matters of faith, and also should decide upon whether the prominence must be given either to the fundamental rights or religious beliefs.

The Apex Court’s decision is remarkable, reasonable and once again the court has upheld the religious, secular and national values in this case. This verdict again become an eye-opener in the history of Indian Judiciary.

On Ayodhya; the communal riddle of India

At last, the Supreme Court has skilfully untied the obscure Ayodhya Temple Dispute knot and paved the path for the construction of the Temple at the disputed site at Ayodhya, and concurrently directed the government to allot a 5-acre plot to the Sunni Waqf Board for the construction of a mosque within the disputed area itself without hurting the sanctity of the temple and the harmony of the nation. Thus the most important and historic judgment in India’s history has put an end to the old dispute that has been a threat to the social fabric of the nation for nearly a century.

Complying with the archaeological references and foundations, the Apex court has finally reached a conclusion that the law must stand apart from political contestations over history, ideology, and religion, and also reminded the nation, that it is the law which provides the edifice upon which our multicultural society rests. The court has put forth the national reality that On 15 August 1947, India as a nation realized the vision of self-determination. On 26 January 1950, we gave ourselves the Constitution of India, as an unwavering commitment to the values which define our society. The Apex court emphasized the fact that the law forms the ground upon which, multiple strands of history, ideology, and religion can compete. By determining their limits, this Court as the final arbiter must preserve the sense of balance that the beliefs of one citizen do not interfere with or dominate the freedoms and beliefs of another.

The Apex court while settling the Ayodhya riddle, ascertained the relevance of the Indian Constitution and its moral application over the nation. The verdict in its conclusion says:-

‘At the heart of the Constitution is a commitment to equality upheld and enforced by the rule of law. Under our Constitution, citizens of all faiths, beliefs, and creeds seeking divine provenance are both subject to the law and equality before the law. Every judge of this Court is not merely tasked with but sworn to uphold the Constitution and its values.

The Constitution does not make a distinction between the faith and belief of one religion and another. All forms of belief, worship, and prayer are equal. Those whose duty it is to interpret the Constitution, enforce it and engage with it can ignore this only to the peril of our society and nation. The Constitution speaks to the judges who interpret it, to those who govern who must enforce it, but above all, to the citizens who engage with it as an inseparable feature of their lives.’

While the court is scientifically pampering the Hindus for their claim on the temple, the court also lovingly embracing and lament on the Muslims for their enforced loss of Mosque due to unpleasant and unconstitutional happenings during the days of communal turbulence. Hence, the court is not executing the law in its true spirit but implementing a cultural balance in this case. The conclusion of the judgment made this balance concrete; it reads:-

‘The allotment of land to the Muslims is necessary because though on a balance of probabilities, the evidence in respect of the possessory claim of the Hindus to the composite whole of the disputed property stands on a better footing than the evidence adduced by the Muslims, the Muslims were dispossessed upon the desecration of the mosque on 22/23 December 1949 which was ultimately destroyed on 6 December 1992.

There was no abandonment of the mosque by the Muslims. This Court in the exercise of its powers under Article 142 of the Constitution must ensure that a wrong committed must be remedied. Justice would not prevail if the Court were to overlook the entitlement of the Muslims who have been deprived of the structure of the mosque through means which should not have been employed in a secular nation committed to the rule of law. The Constitution postulates the equality of all faiths. Tolerance and mutual co-existence nourish the secular commitment of our nation and its people.’

Yes, once again the honorable Supreme Court of India has made an immortal as well as the memorable judgment that has more touch and concern over human and cultural values rather than law in its true spirit. Yes the Apex Court has upheld the integrated harmonious spirit of India. Thank you, Supreme Court.