C.T. William the writer and journalist once again makes a strategic turn in the art of writing. This time William poetically reports the most shameful cases of sexual harassment that shook the entire India, the incredible spiritual India and Kerala, the ever green Gods Own Country; under the title Seethamar Karayukayaanu (Seetha is crying). Where Seetha represents the Indian women harassed. The other work entitled Swargeeya Narakam (The heavenly Hell) is the unusual travelogue written on the United Arab Emirates and Thailand which depicts the bitter and sour experiences of the expatriates especially from Kerala. Both the works are exceptional in its kind and rarest of rare species and his literary contributions reach the magic number nine.

Mr William has no specific portfolio to claim the identity of a particular form of writing; though a specific style and narrative always to earmark his literary presence. William could not be branded as the continuum of any stream of writing. He writes Philosophy, Poetry, Travelogue and Criticism and also sometimes scribes exclusives and investigations to various online media that too become assets to his own cyber space. His thought-provoking speeches in YouTube channel CT SCAN is hitting the elite community.  But the undercurrent of his writing is oriental philosophy. He blends oriental philosophy with the essence of creative journalism in all his writings. It is very difficult to put a frontier to his writings and to fix a literary form to his writings. This may be one of the reasons for his beingness and nothingness in the realm of literature.

He started his writing earlier from his childhood. He has contributed to the high school magazines produced in manuscript. His earlier poems while he was studying for graduation were printed in black and white by the Mathrubhumi Weekly, printed and published from Kerala. However his first anthology of poems in English “The Story Of sidhartha Retold” written during this period yet to be published. After having graduated Mr William has put on the robe of a journalist in “Youth-N-Fashion”, a magazine published from New Delhi. Afterwards he along with his friends started a magazine “Sarovaram” from Thrissur, the cultural capital of Kerala; that attributes to literary journalism.

In continuance of his exceptional literary carrier after the authoring of seven books launched William now adds some awesome spices through the titles Seethamar Karayukayaanu (Seetha is crying) and Swargeeya Narakam (The heavenly Hell) to reach the magic number Nine. These books are printed and published by Mentor Books, Thrissur with online partner, instamojo.com 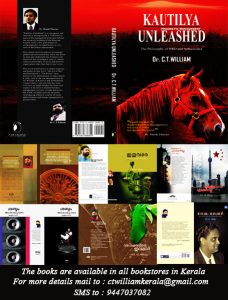