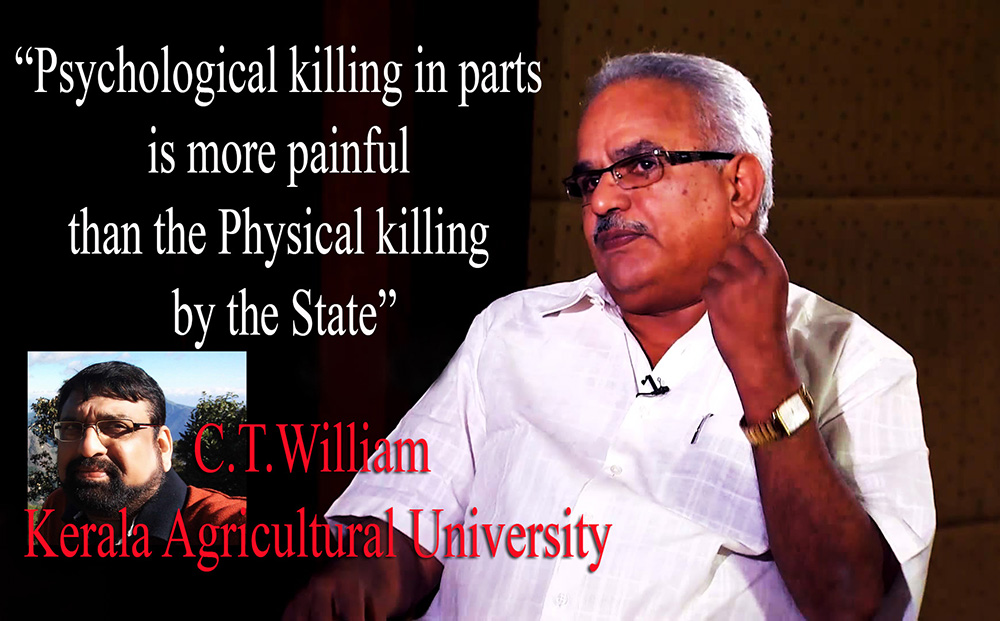 At first may I salute you sir, for your gallant view on the recent shooting and killing of the Maoists in the state.

Your view that, nobody has the right to shoot and kill those who express their opinion in the state and it is not suitable for a civilized society to suppress the voice of those people; should be heard in Kerala and should echo the same throughout India. Once again I salute you sir.

It’s a fact that three Maoists were killed in fake fight with the state-sponsored thunder bolt operators. But you never forget that there are people who are being killed in parts by the state for those who expressed their opinion.

Sir, I am a civil servant who retired on superannuation from Kerala Agricultural University as per existing rules and regulations. But I was being harassed and killed in parts by the authorities of Kerala Agricultural University, controlled by your party, for the reason I have become an objective correlative for registering a case against a Professor who alleged to have involved in a corruption of Rs. 1.37 Crores, as reported by Auditor General, through the Court of Vigilance, Thrissur. The Quick Verification Report as per order No. B/606/15 dated 16.3.2015 Signed by Dy. Supdt. of police, VACB,Thrissur, also supports the allegation.

I was also subjected for plotted assassination by the said professor, supported by your party, and even skillfully attempted to trap me into a sexual harassment case. I have submitted those evidences including audio tapes to you sir and to the offices of the Ministry of agriculture and also to the apex authorities of Kerala Agricultural University. But, neither your office nor the responsible offices concerned have rightly responded to my several appeals and prayers till date. Instead, they revengefully denied my pension benefits for the last one and half year without any legal support of existing rules and regulations.

The concerned news in this regard was out through print and visual media. Some of such news clippings from YouTube are hereunder linked for your audio-visual information. (https://youtu.be/abSiRTg7Xxc) (https://youtu.be/6rjsjaSjhEs)

Hence, I request you to take responsible action in the case as you have responsibly taken in the issue of recent shoot and killing of the Maoists in the state. The concerned files are still kept in the freezers of the offices of the Chief Minister, Minister for Agriculture, Minister for law affairs and the Director of Vigilance.