Kaleidoscopic views on Justice Karnan and the Indian society 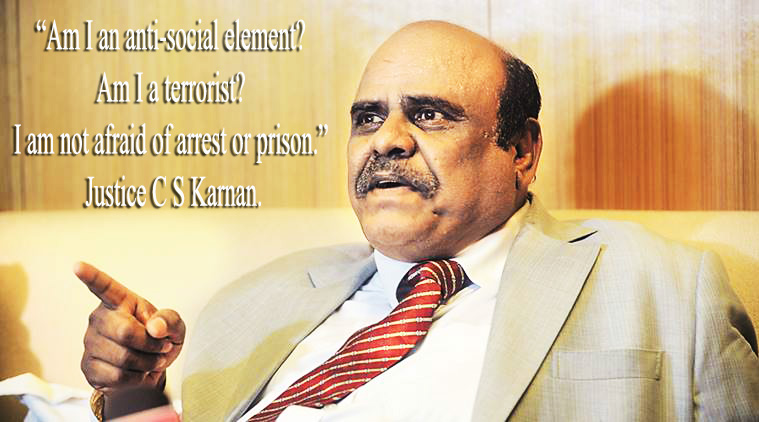 Chief Justice of India J S Khehar, along with judges on the bench Justices Dipak Misra, J Chelameswar, Ranjan Gogoi, M B Lokur, P C Ghose and Kurian Joseph unanimously concluded; “We are of the unanimous opinion that Justice C S Karnan has committed contempt of this court, of the judiciary and also the judicial process.”

The Supreme Court Orders reads specifically that, “His actions constitute contempt of this court and of the judiciary of the gravest nature.” The Supreme Court has also emphasized the law and hold on the truth that reminded ‘be you ever so high, the law is above you’.

The Law Man, Justice Karnan, however responding to this historic judgement in a different manner, with much loaded eccentricity due to his acumen attitude to the issue. He justifiably retorted; “The Supreme Court issued the order at 11 am. At 11.20 am, I issued an order setting aside the Supreme Court’s order. How can they issue such a gag order to media against publishing my statements?” “My complaints should have been decided on merit, but it was not done. Attorney General failed to apprise the Supreme Court properly,” Justice Karnan said.

“Am I an anti-social element? Am I a terrorist? How can they issue a gag order, it’s illegal. Without hearing my side, they have passed several orders against me. I am not afraid of arrest or prison. The general public is behind me. This is a complete failure of the judicial system. I have seen prisons already.” He asks. “As a High Court Judge, I have visited Karur, Sivaganga, Virudhunagar and Kanyakumari prisons.” Sarcastically he defends.

“I am like Napoleon, an adopted son of Dr. Ambedkar. They say I am insane. If I am insane, how can I be sent to prison?” He legally defends.

He further clarifies, “I already sent representations to the President of India. So far, no action has been taken in this regard. The Supreme Court order is not maintainable in law; I am setting aside the Supreme Court’s gag order against media. This is not an issue between seven judges and me. It’s an issue of corruption in the judiciary, which is being ignored.”

Silence! The wrangling in the virtual court room of Indian society headed by media continues for nothing but as usual for aggravating mass confusions. Let our media rooms turned virtual court rooms attend to the best interests of the nation instead of marketing the media brands.  Let our people including people of law keep their democratic voice unbiased for the welfare of the nation and its judiciary.

But one has to get the crux of the issue definitely for honoring the gospels of democracy. So what are the debatable issues here? Where does the honourable Supreme Court and Equally honourable Justice Karnan have positioned so far?

It’s a fact that the Article 129 of the constitution gives the Supreme Court the power to punish for contempt of itself. But at the same time the Contempt of Courts Act, 1971, aims to define and limit that power riddles everything. This is the reason why the court could not have been harsher on Justice Karnan, even if it wanted to, because Contempt of Courts Act, 1971 has limited the maximum punishment to simple imprisonment for six months.

The debatable ground is therefore, the Supreme Court does not enjoy unfettered power to punish anyone for contempt of itself, in the manner it may like to, under Article 129 for Contempt of Courts Act, 1971 limits that power.

In Re: Arundhati Roy (2002) case, the apex Court has clarified that, If a citizen in the garb of exercising her right of free expression under Article 19(1) tries to scandalize the court or undermines the dignity of the court, then the court would be entitled to exercise power under Article 129.

But in the case of Justice Karnan, how does the Supreme Court conclude that an alleged contemnor scandalized the court or undermined its dignity?

Section 13 of the Contempt of Courts Act says as follows:-“Notwithstanding anything contained in any law for the time being in force, no court shall impose a sentence under this Act for a contempt of court unless it is satisfied that the contempt is of such a nature that it substantially interferes, or tends substantially to interfere with the due course of justice.”

The truth is that complying Section 13 of the Contempt of Courts Act, 1971, the Supreme Court have only very few occasions to invoke its contempt power against anyone – whether a judge or a non-judge.

On the basis of non-effective exercise or implementation of Section 13 of the Contempt of Courts Act, 1971, naturally questions may arise on whether Justice Karnan’s alleged contemptuous actions were of such a nature or danger as interpreted in the Act.

The punishment imposed on Justice Karnan on the other side, also raises the question of violation of Article 20(2) of the constitution, which states that no person shall be prosecuted and punished for the same offence more than once.

The Supreme Court has already twice punished Justice Karnan through its earlier orders.  On February 8, while issuing notice to him, the court had directed that he forthwith refrain from handling any judicial or administrative work, as may have been assigned to him, in furtherance of the office held by him. On May 1, taking note of his contemptuous actions, the court restrained all courts, tribunals, commissions or authorities, from taking cognizance of any orders passed by him, after February 8.

In this critical juncture, we may expect the better confessions from Justice Karnan and the best decisions from the honourable Apex Court of India. Let our media and people play for the best to uphold the majesty of Indian Judiciary.

Tail piece from Arthashastra of Kautilya: “A judge shall not: threaten, intimidate, drive away or unjustly silence any litigant; abuse any person coming before the court; fail to put any relevant and necessary questions or ask any irrelevant or unnecessary ones; leave out relevant answers to his questions; remind any facts; draw attention to an earlier statement; fail to call for relevant evidence; call for irrelevant evidence; decide on a case without calling any evidence; dismiss a case under some [biased] pretext; make someone abandon the case [purposefully]; misrepresent a statement; coach witnesses; and rehear a case which had been completed and judgment pronounced. All these are punishshable offences; in case the offence is repeated, the judge shall be fined double and removed from office.” {Bk.4.Ch9.Vs.13-16.}. Courtesy: KAUTILYA UNLEASHED: By C.T. William: