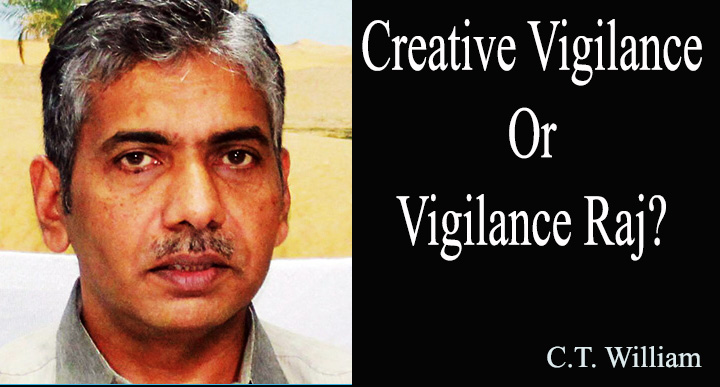 The word “Vigilance” says it all. No more verbal gymnasium need to explain more about the Vigilance and Anti-Corruption Bureau (VACB) in Kerala. But the political winds lashes crisscross over the concept of “Creative Vigilance” that was born out of the creative intelligence.

The true crusader and vigilance chief Jacob Thomas is still sailing his ship over politically pampered waters of sponsored vigilance.

When the odd crusader roars, “I’m not afraid, the drive will continue as long as I am heading the vigilance bureau”, we also listen to the bad murmurings that may develop to the swan song to be sung in the nearest future that abruptly curtains the concept of “Creative Vigilance” to prevent corruption from happening by identifying the loopholes in the system rather than just going after the offenders after the act. In his words of bravery and self- confidence, he said that he will act as a referee to show the yellow card as a warning signal of “Creative Vigilance” and the red card as an execution.

The green room of the political stage was rather more vigilant than the so called “creative vigilance” and the actors played the climax recently. The care-free creations of the “Creative Vigilance” haunted the politicians as well as the bureaucracy to the notorious extend to draft a note by the association of the IAS officials. The note with much irritation stated that, “We are deeply aggrieved and saddened that such an officer, Vigilance Director Jacob Thomas, whose integrity is prima facie doubtful and not beyond suspicion, is allowed to sit in judgment as vigilance director on the conduct of other civil servants.” In the context, “We are requesting our colleagues of the Kerala IAS Association to avail one day’s casual leave on January 9, 2017, to express our sadness, frustration, and professional dissatisfaction and to show solidarity with our aggrieved colleagues, in allowing the present vigilance director to continue abusing his powers.”

The climax rehearsed in the green room and played on the stage was not final. A super climax was staged recently with a surprising magical twist. The super climax as shown by the Kerala High Court severely criticized Vigilance and Anti-Corruption Bureau (VACB) for exceeding its powers and warned the state government that the ‘Vigilance Raj’ would be the result if the anti-corruption agency is allowed to continue the course. The super climax further shockingly delivered the dialogue that the state Vigilance and Anti-Corruption Bureau is directed to “explain” its authority to “comment on or direct” the government to review administrative decisions and actions taken by the government. Justice P Ubaid said that “The government will have to think very seriously and decide whether the VACB in Kerala should be allowed to reign over the government. If Vigilance is given such powers, Kerala will go to vigilance raj. It appears that some of the special judges (vigilance) do not know the scope and extent of their functions under the Prevention of Corruption Act. I have come across so many cases of complaints mechanically and senselessly forwarded, either for preliminary inquiry or for investigation, thus resulting in atrocious consequences.”

We could not lament upon what the Kerala High Court has declared on Kerala Vigilance. Because the Kerala Vigilance Manual ascertains the honourable Court’s comment as it says, that “The Vigilance & Anti-Corruption Bureau is a specialized agency of the Government of Kerala designed to combat and control corruption among its public servants. Invested with wide investigative/enquiry powers derived from statutory provisions and Government/Department orders, the Bureau undertakes the investigation of cases registered under the provisions of the Prevention of Corruption Act and any offence under any other Act committed in the same transaction and conducts enquiries into complaints of misconduct and misdemeanor on the part of the public servants. The work of the Bureau is closely monitored and over-seen by the Vigilance Department in the Secretariat under the Principal Secretary to Government, Home & Vigilance.”

On analyzing the comment of the honourable court and what is written in the vigilance manual we have to reach at a consensus that the “Vigilance Raj” should not go like this. At the same time the manual bravely put forth the main functions of the Bureau as: a).To effectively combat corruption and misconduct on the part of the government servants and other public servants of the State. The Bureau takes up investigation/enquiry on the following types of offences/allegations, a). Offences punishable under the Prevention of Corruption Act, 1988, b) Any dishonest or intentionally improper conduct or abuse of powers, c) Gross negligence or dereliction of duty, d). Misuse of any public money or property of the state. The analytics however go like this and as research methodology scientifically infers; the output here is becoming more and more dubious even to question the existence and survival of the Vigilance and Anti-Corruption Bureau (VACB) in Kerala. Forget about the analytics and brick bats; Let us welcome a Creative Vigilance Raj to ensure a corruption-free welfare state.