Be the Front of Love Dedication Fraternity 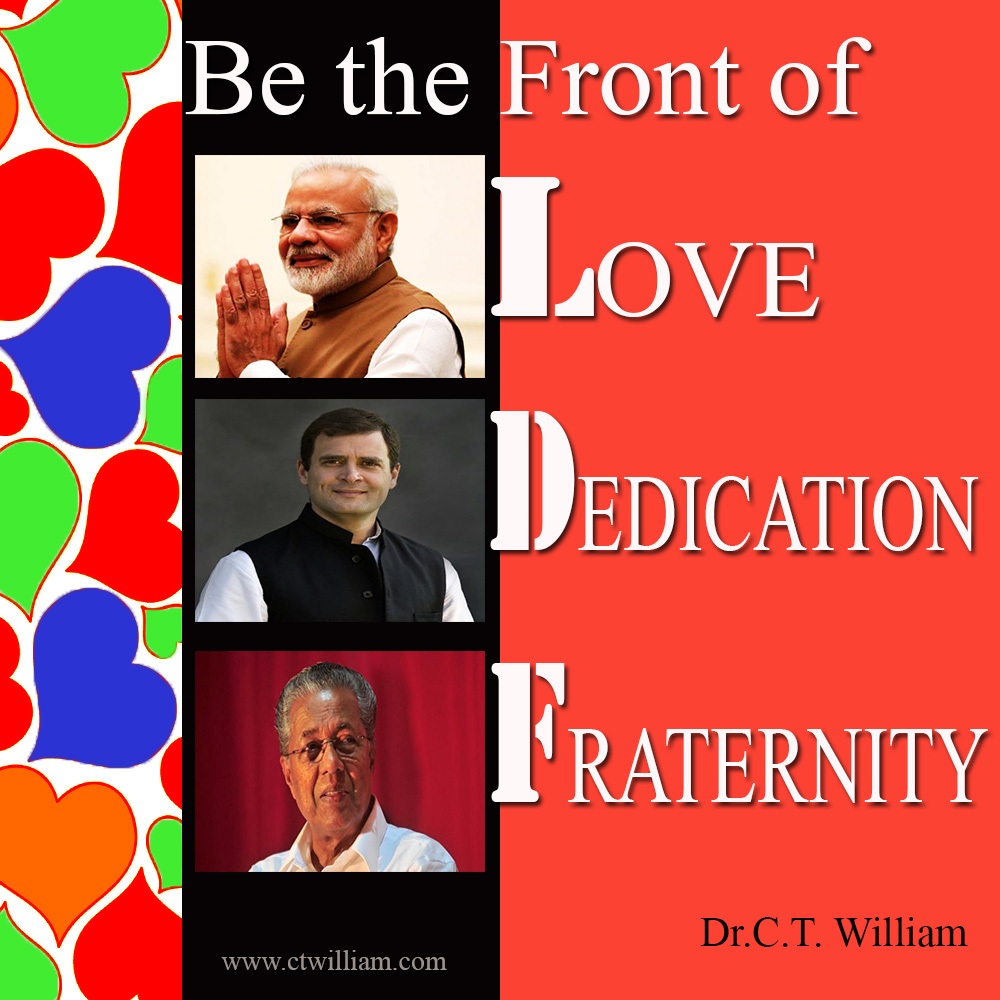 Once again the historic Lok Sabha election is over. The Lion is back once again. India is towards modification under the great Narendra Modi. At the same time this election has pushed Kerala to a political orphanage. The incredible majority vote grabbers of the congress party has to seek abode under the saffron umbrella of Modi. What is happening in India in the midst of these political miracles and phenomena?

This election has proved that the voters of India are not so crazier after the outdated political verbal exercises and propaganda. In fact, they aspires the progress and development that are concern to their day-to-day life. The unquestionable victory with the giant Modi conveys the gratitude of the voters of India as their aspirations were fulfilled.

All attempts; that the congress has fielded to regain the lost power on India once they had for decades, have been miserably failed. All the allegations and propaganda the congress unleashed against the Modi Government have been recoiled and the poor boy Rahul has tendered his appeals of regrets before the apex court to save his juvenile image. The congress should understand the fact that the Modi Government was constituted on the basis of considerable majority of people’s franchise. Hence, the right is with the people itself to topple down the government abiding the rules and regulations of democracy.

The opposition should know that allegations against a government could not be made but the allegations will have to come out of the conscious evil attitude of the governed. It’s indeed a lesson to the opposition parties in India that the aim of contesting election should never be to topple down the government in force alleging artificially, but to show their virtuous excellence before the people and win the hearts of the people. But the opposition under the leadership of congress has to shoulder a moral flaw on account that their allegations against the government were all proved crafted or backed without any solid evidences and resultantly they failed to be the moral opposition in India.

The left front in India especially the main constituent, the communists have become drastically weak and about to vanish without any hope of regain its strength. This is mainly because of the exhaustion of their ideology due to grievous lack of their concern to the once glorified ideology. The communists could not rebuild or readapt their ideology according to the need of the society that undergoes revolutionary transition. No red brigades here either to rebuild and readapt the ideology or to whistle clarion to the red volunteers for such a rebuilding or readapting of the historic ideology. This is the greatest tragedy with the communists of India. To make matters worse, the comrades who lived for the poor, destitute and the marginalised have consciously transformed themselves as the branded comrades to support and strengthen the corporates and the multinational capitalists. Evidently the communists in India has consciously positioned themselves far away from the poor, destitute and the marginalised. If this be the situation to continue in India, communism has to be served as an optional pinch of salt on the table of democracy along with the other sumptuous dishes.

The tragic failure with the communists in Kerala has to be studied and analysed specifically along with the facts discussed above. The political analysts in general have to corner Mr Pinaray Vijayan from all angles for his militancy and stubbornness that made to lose the workable arena for the communists of Kerala. It is his political advisors and the bureaucrats under his own captainship; with the legal support hurt the sentiments of the Hindus especially the pilgrims of Sabarimala. This has paved the way for the remarkable and terrific failure with the communists in Kerala in the recent election.

No doubt, it is the democratic responsibility of every government to implement the law and order as they are pronounced by the apex court of the country. But at the same time, government should understand the gravity of the impact on people while implementing such decisive court orders. In the case of Sabarimala issue, the Hindus especially the pilgrims of Sabarimala has been deeply hurt and the after effects were unsolvable and irreparable. While the government taking judicious decisions on sensitive issues, there should be a common and equivalent agreeable platform for all sections of people. But here in the Sabarimala issue, there were some conscious lop-sidedness and inequality while implementing the court orders. The government was in an unprecedented hurry to implement the court orders regarding Sabarimala. The government has applied all its political and administrative machinery to implement the law. This has created political and religious divisions in the secular society. Consequently the government has to go blind and the blindness has miserably affected the rule and hence lost the election deserving no pity or sympathy.

All experiences either political or administrative in democracy are the lessons to be learned for appropriate actions. Hence corrections and rethinking are essential for those who rule and the ruled. The ruling government, the opposition front and especially the communists of Kerala have to learn the lessons of democracy that emerged in this election as an indispensable output. We have no option but believe the government, the opposition and the communists that they will learn and act appropriately in this case. While assessing the immaturity of Mr Pinaray Vijayan due to his uncompromising militancy and stubbornness, we have to equate him with the same immaturity due to the boyish attitude of Mr Rahul Gandhi. Both the personalities have contributed much tragedy to the society and both of them are ignoring the ground realities and behaving impassive. The truth is that, the ultimate sufferings and after-shocks are with this poor society and let us console ourselves and make us believe that everything unpleasant here is the destiny or fate of this poor society.