App developed in China to find out missing Alzhimers victims. 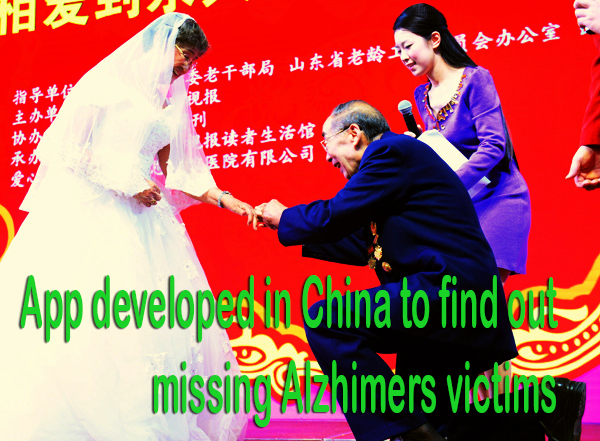 China has developed an App to find out the missing senior citizens who are the victims of Alzhimers or Dementia. Toutiao online content aggregator under the operational control of Zeng Hua has so far recovered 340 people who were missing due to mental illness connected with either Alzhimers or Dementia. . The app will send alerts to users who come within 10 kilometers of where a missing person was last spotted.

According to latest research report conducted by Xiong Gubin more than 1,370 people age 60 or over goes missing every day in China. The White Paper on the Lost Elderly, released on Sunday, states that Alzheimer’s disease and other forms of dementia are the major cause of such disappearances. The research report was released in connection with the promotion of Chongyang Festival, the Chinese traditional festival for the senior citizens.

Xiong Guibin, co-author of the report says that up to 72 percent of senior citizens was reported missing having trouble with their memory, while 25 percent have been diagnosed with Alzheimer’s.

What is aggravating the problem in China is the large number of elderly people is living alone in rural areas, whose relatives have migrated to cities to find better-paying jobs.

Toutiao the online content aggregator has signed a contract with police in Jinan, Shandong province, to share missing people’s reports and spread the information online.

“Everybody wants to be a good son and daughter and treat their old parents well, but the mental issue is not a problem that money can solve,” Dang said. “It calls for professionals.”

The China National Committee on Aging predicts there will be 400 million people age 60 or over by about 2033, growing at a rate of 10 million a year. This would mean senior citizens taking up more than a third of the population in 2050.

Coupled with this, an estimated 247 million people are leaving their hometowns to live and work in cities, leaving elderly relatives behind.