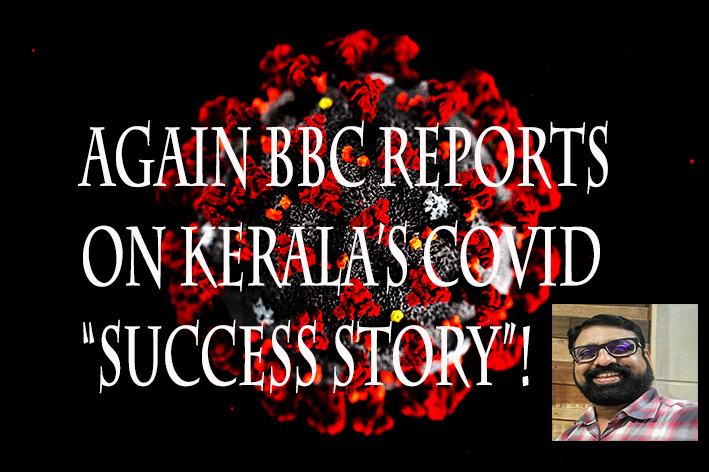 At last, after a short break, BBC has once again reported the Covid-19 scenario from Kerala, with the thinking title-India Coronavirus: How Kerala’s Covid ‘success story’ came undone”. Mr. Soutik Bishwas, India correspondent, this time reported the story without any comment either from the Health Minister or Chief Minister of Kerala. But it is interesting to note that the report now mainly loaded with the comment of Dr. Sashi Tharoor MP of Kerala. In fact, a few doctors have also been supported the story of BBC on Covid-19 infected Kerala.

After recalling the conversation with the Chief Minister Mr. Pinarayi Vijayan, Dr. Tharoor informed BBC reporter that he had great concern over the Keralites return from overseas and other states. Dr. Tharoor lamented that not only the virus was coming in, but infected people were transmitting the contagion to the fellow passengers on the plane. “I think this was unavoidable since every citizen has a constitutional right to come home to India, even if they are ill. But that made a major difference.” the BBC reporter quotes Mr. Tharoor.

It is very surprising to note that the story has concluded with the eye-catching and eye-opening comment by Dr. T Jacob John, a retired professor of virology at Christian Medical College, Vellore.  Dr. T Jacob John said, “Combating Covid-19 is like running on a treadmill whose speed is being cranked up. As the virus spreads you have to run faster to tame it. It’s exhausting, but there is no other choice,” he says. “It’s a test of endurance”.

The story reveals the anxiety and confusion mainly among the people living in the southern coastal villages around Poonthura in Kerala.  Rev. Fr. Bebinson has also informed the reporter that the fishermen folk living there are anxious, confused, isolated, and tense. Dr. Lal Sadasivan, a Washington-based infectious disease specialist has also commented that “The real surge in Kerala is happening now. The virus had earlier been curbed in a controlled situation when the state’s borders were closed,”

B Ekbal, head of an expert panel advising the government on prevention of the virus, is the only spokesman who catered to the reporter about the Pandemic situations in Kerala. Mr. Ekbal but focused on the laxity of the people when the lockdown was eased. He said “Some amount of laxity was expected as people have begun going out to work in most areas. We are trying to motivate them to be safe”.

However, the report reminds the cautionary tale of Kerala against premature media declarations about the flattening of the curve, which involves reducing the number of new cases from one day to the next. But the vital missing link in the BBC story, from the reader’s angle, is the absence of the words of the Health Minister and the Chief Minister of Kerala.