They sell God for the Hell: the story of Bommavalahas 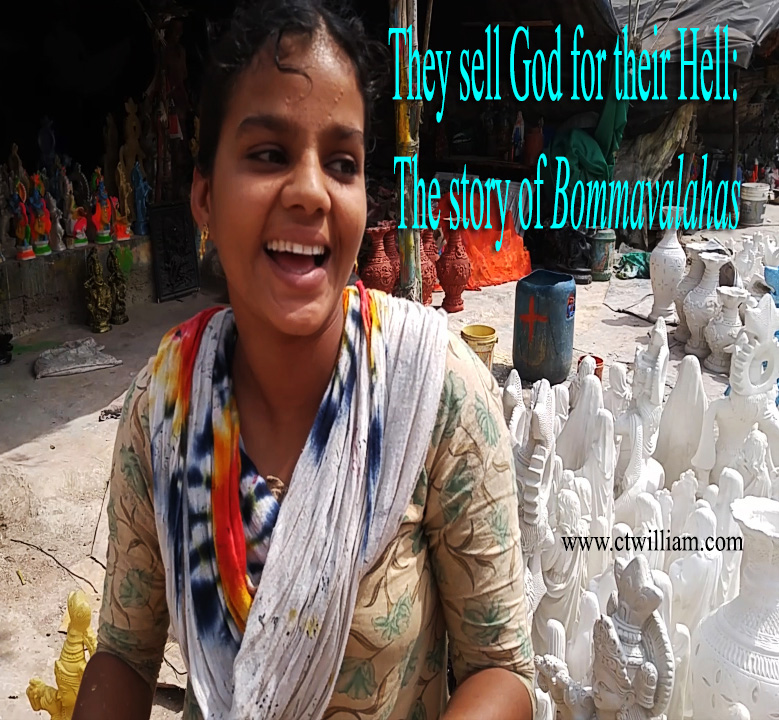 Being a journalist I have scribed so many stories that have been sensible to readers. But the story of this teen-aged Rajasthan girl, Varsha is disturbing me a lot. I met her in the roadside of Kerala border while I was moving to Karnataka. She belongs to the clan of Bommavalahas (Idol Makers) of Rajasthan. This fourteen-year old cute is studying for the tenth in a higher secondary school in Kerala.

While I am taking a snap-shot interview of her father in Hindi, the language which is not at all a tameable one for me, Varsha approached me and started chirping in beautiful Malayalam. I was really stunned to hear that the Rajasthani girl is communicating like the parrot that narrated the classic Ramayana to the father of Malayalam language, Thunchath Ezhuthachan.

Pathetically she was one among the 27 children who were studying in the nearby school in Kerala. Normally a tenth standard student from an average family would have been provided entrance coaching as a part of procuring the covetable admission to some engineering or medical college. But when I explored she innocently conveyed her ignorance about it. At the same time she is optimistic that something good will happen in her life which is unpredictable. She simply said, “Let it happen as it is determined by fate.”

Her Bapulal is defending their fate they being Bommavalahas (Idol Makers) of Rajasthan. According to him their life is pre-written and the fate is pre-recorded. They are moving from one city to other and dwelling on roadsides. They does not own house but they owe to the dilapidated sheds that are thatched with coconut palm leaves. They have no luxury of having bedroom, kitchen, drawing and study rooms for their children. To them the shelter is for a multi-purpose space for anything that are related to human living. If fortune allows they may have their daily bread and consequently they may or may not sleep. They are giving birth to their children in such a shabby environment and their children are brought forth in the same suffocating surroundings.

They are here in Kerala for a quarter century and these people might be exercising their franchise and would have participated in the acclaimed festival of democracy. But still they does not have the primary essentialities to lead an average human life. In fact they have no organization politically or communally to raise their voice for minimum justice. They does not have power supply to have electric lights and other electrically operated household gadgets. No spokesmen of democracy heard them or wiped their grievances. Fortunately once a Good Samaritan has seen their children studying in the limited light provided by the street lights, he provided solar lights to these children for facilitating their studies.

Bomma making or idol making is a job that having its own science, art and skills that are instincts. Firstly the idols are made of plaster of Paris (Clay) through various moulds. Then they were chiselled and structurally corrected by some Bommavalaha. Afterwards these were dipped in primer so that it could be painted effectively. Spray guns and brushes are applied for painting the idols. The final output were then displayed in the roadside for sale. The price-range starts from 500 to 1000 rupees. The travellers passing by may stop for a selfie click or a normal camera shot. Naturally these people will never buy any idols.

Yes, these blessed and chosen clan of Gods are making thousands of idols of Gods and in fact these dump Gods bring them money and life. Unfortunately the animated and active politicians are neglecting them and mercilessly turn their faces away from them throughout their life but at democratic intervals they used to approach them for their valuable votes and afterwards comfortably forgetting them.

Since the rituals and beliefs are at stake in Kerala, perhaps the government or any courts may one day prohibits their idol making alleging that the idols are the main reasons for the encouragements of certain beliefs and rituals here. I pray sincerely to God for these people such unpleasant may not happen in Kerala.