Winnability is the other word for Parliamentary Desires 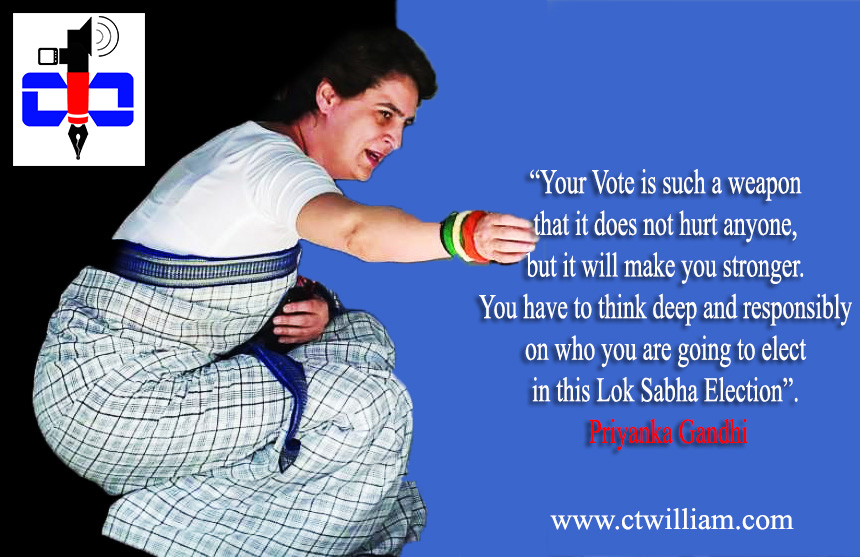 “Your Vote is such a weapon that it does not hurt anyone, but it will make you stronger. You have to think deep and responsibly on who you are going to elect in this Lok Sabha Election”, Priyanka Gandhi, the super star of this Lok Sabha election, innocently Inspires the Indian Public.

Elections to upper houses in any country is decisive. So also in India. Generally two united fronts will be on stage in almost all nations. In India we have the Indian National Congress on one side and the Front that is against Indian National Congress on the other side. Fortunately as usual Indian National Congress mobilized the force under United Progressive Alliance (UPA) and the other Front mobilized by Bharatiya Janata Party under National Democratic Front (NDA) are the decisive fronts that contests in this election. It is a customary political practice in India that these alliances fields their Prime Minister Candidates during the hectic phases of election to upper houses. Hence there is the veteran lion, Narendra Modi and the handsome Young Lion-tamer, Rahul Gandhi are for Prime Ministerial candidates of the National Democratic Front (NDA) and the United Progressive Alliance (UPA) respectively.

Normally there will be some national issues that are put in surface or furnace either for expediting or exploding the election contest. But this time, on analysing, found that there is not such an issue to conflagrate the election scenario. Though the United Progressive Alliance (UPA) tried to blaze the issue of Rafale Warplane corruptions, National Democratic Front (NDA) has defended their maximum to annihilate the whole issue. Consequently this election scenario is really bankrupt in terms of bringing up any national issues.

Finding no other way to escape, the United Progressive Alliance (UPA) has excavated the old and all-time-applicable issue of Fascism and re-christened it to form a national viral issue. Fascism in brief is the antonym of democracy. It’s a mode of rule that encourages castes and that caters and emphasizes corporate economy. It may also be branded as the rule that is against the democratic welfare of the people. These salient or characteristic features of Fascism are now being imposed on National Democratic Front (NDA), specifically on the Bharatiya Janata Party. And the United Progressive Alliance (UPA) is about to groom 543 Anti-Fascist Nationalists to the upper house of India.

The other issues such as demonetization after-shocks and the financial anarchy behind GST practises were eclipsed due to lack of required political arms and ammunitions. The Rafale warplane issues went off out of control and lost somewhere in its flight. The United Progressive Alliance (UPA) also terribly failed in their attempt to bring the recent Indo-Pak war, an issue to accelerate the election.

In Kerala the issues such as the Flood, Sabarimala and political murders are expected to be the burning issues. But unfortunately no issues illumined so far. The Flood-Oriented issues are well-defended by the Left Front and the Sabarimala was defended by the code of conduct of the election commission whereas the political murders not worked; for the murders are being treated as the applied ethics of all political parties in Kerala.

It is in this context that the inspiring sermon of Priyanka Gandhi bags relevance. What she inspired the Indian public is, “Your Vote is such a weapon that it does not hurt anyone, but it will make you stronger. You have to think deep and responsibly on who you are going to elect in this Lok Sabha Election.” This sounds and resounds meaningfully in the Indian society and it opens a new window to the Indian Politics.

What Priyanka Gandhi said is truth. She might have seen the pathetic reflections of Indian Women on the national political mirror and also might have inspired by the great woman, Indira Gandhi who ever stood for the better and best of the women in India. Like Priyanka Gandhi, Mamta Banerjee from West Bengal also inspired the women folk by ensuring 40.5% representation for them in the coming election in India.

It is so pathetic that the women who have constructed the great and historic Women’s Wall in the reddened Kerala, got 0 % representation in this election in Kerala. Those women who mounted Sabarimala under disguise and those chanted mantra for the Lord Ayyappa too awarded 0 % representation in Kerala Politics. These not-at-all poor women were made sharp and effective tools to upgrade the Government of Kerala, simply to empower the party and its patriarchs under the disguise of law and legislature.

This is not because there were no apt women in India, but due to the cruellest marginalization imposed on women. It’s a fact that there are substantial population of right women in India, but they were not allowed to bypass the Women’s Wall created by the intelligent masculine political muscle power. At the same time the paradox prevails, that those masculine majority still continuing the harassments and molestations against women have stolen their legitimate representations all over India.

My appeal to the masculine political population in India is that, let women be freed from the duty imposed on them to build and support Women’s Wall for the support and survival of the masculine political population. The practice of encouraging and promoting a minority of women who are always in the front row should be discontinued and should be able to find out those women in the rows adjacent to the front row for further encouragement and promotions. Let our women be adaptable to stand straight with their unbowed head before the paradise monopolized by the masculine majority. Women population should come forward with an uncompromising struggle rather than simply playing hide and seek with the frivolous propaganda weapon, “Me too” campaigns.

It is in this context I see substance in the inspirations of Priyanka Gandhi and Mamta Banerjee. Besides, when we re-think and re-translate the emergency era during the reign of the Iron Lady of India, Indira Gandhi, in the current political situation, we will be forced to admit the historic fact that no rule afterwards emerged to outshine the rule of Indira Gandhi, the great Prime Minister of India. Hence, I see great expectations in the inspiring activities of Priyanka Gandhi and Mamta Banerjee. I therefore strongly recommend for the second coming of the women of India to prove once again that feminine rule is more equal to that of masculine rule.