Try to fly so high like Fruit Bats and conquer Nipah 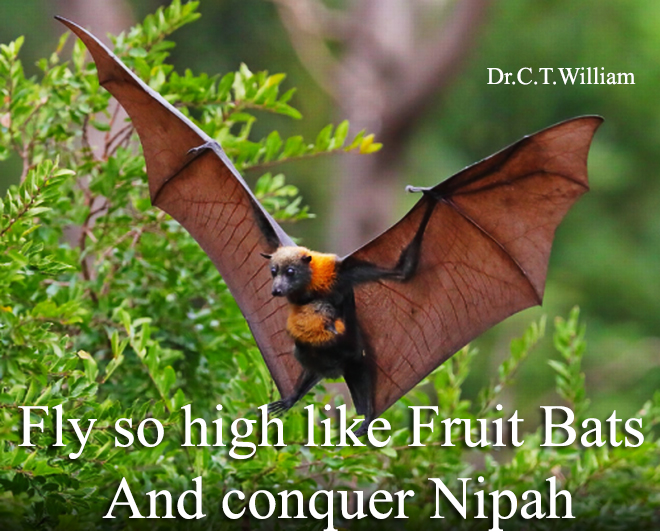 Kerala is always keeping in its administrative notoriety as and when epidemic diseases outbreaks in the country. The tragic memoirs of the great plague has its soothing effect when compared to the present terrific outbreaks of diseases that we have celebrated from post plague epidemics such as H1N1, Chikungunya, dengue and now Nipah.

What is happening in Kerala when an epidemic outbreaks? As usual the Media Players starts their Google dynamics and competitively airing at Himalayan blunders forgetting the geography, sociology, human physiology, psychology and other related sciences of the country in which they belongs to. The media-syndrome-affected Kerala psyche hails hosanna en masse to the discordant tune of media and they grows and multiplies the legion of confused.

In the current scenario of the Nipah outbreak the same situations are prevailing. The great administrative machinery of the center or state has not even completed their primary research on this disease. The state has miserably failed in identifying the real victims of this disease even after the lapse of accountable period of time. The confusion regarding the management of the medical treatment and applying of the available medicine is not still on. Almost a dozen of victims have died of this disease even without any concrete confirmation from the government. The samples are still in various laboratories and the tests are undergoing. It is said that some medicines have imported recently and the trial-and-error mechanism yet to be started.

The question of medical expertise, the methodology of diagnosis and application of medicine are yet to be answered. To make matters worse, the so called Google-Media-Experts are confusing their maximum to spread panic among the victims, people and the government. The rights of the dead is violated and the dead bodies of the victims exposed orphan for hours while the media channels celebrates on the dead.

At the same time some international experts in the concerned area declares that nothing to worry about and undergo panic. Quite blindly, the said reservoirs of this Nipah virus; the fruit bats are victimized even without any scientific confirmation in the matter. No reports exposed to confirm the death of any reservoirs; the fruit bats in this context. It’s a miracle indeed why the carriers of the pathogen or Nipah virus survives in fruit bats and why victims die in the name of these poor creatures. This question is wonderfully answered by some scientists that the carriers of the pathogen or Nipah virus survives because of their hectic flight mechanism. Their high body temperature while flying burns the demonic pathogen or the Nipah viruses and thus they survives. So we have to reach at a conclusion that no human being need die of Nipah if they have hectic exercises to burn the pathogen or viruses within.