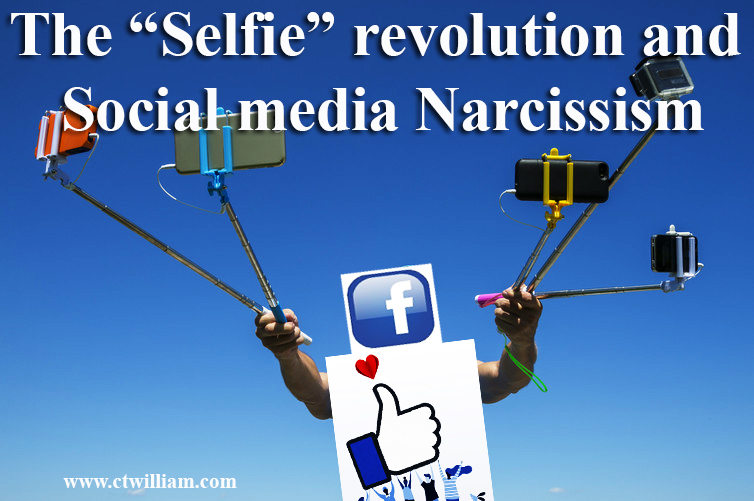 The word “Selfie” was named as the word of the year by the Oxford English Dictionary in 2013. This wonderful word was first used by a drunken Aussie in 2002 who took a picture of his own blood-stained lip after a fall to exhibit the same to his friends. The successful journey of the “Selfie” thus fathomed the vast expanse of social media domains such as Facebook, twitter, WhatsApp, YouTube, LinkedIn and so on.

Social media started its bloodless revolution over mass communication. And the revolution is changing the whole scenario of mass media, politics, health, education, the law and everything cosmic.

There has been considerable massive increase in the use of social media and the incremental phase is continuing. Facebook architects claims that their legions of users have crossed over one billion per day. This cyber explosion of social media has led to remarkable cultural, social, and economic changes.

However the platform of social media is strongly concretized by absolute Narcissism. Narcissism can be defined as the inflated view of oneself that goes self-highlighting and self-marketing.

Research in this field says that social media is becoming a play area for narcissistic individuals for their self-promotion.  No doubt, our children are under the process of metamorphosis to frame them more and more narcissists.

Most of the social media account holders are on the platforms for self-promotion, self-attention and self-admiration. Some others consume an oversized amount of space for social media feeds.

The “friends” boasting about their amazing lives accompanied by web-weighed pictures under hashtags with the support of tons of “likes” and transforms themselves and others to the tranquilized community of narcissists. Today approximately 100 million people on social media sites prefer to Snap Chat taking selfies, running them through filters, and sending them to their friends.

Even though the explorative research findings support the vast spreading narcissism, this magic social media has become a tool to form and maintain close relationships, learn new things, or just provide entertainment. But at the same time it may be generalized that the social media friendship or relationship, the propagation of knowledge and the contents of entertainment are quite shallow or superfluous.

The research findings also bring the inference that this mega cyber legion are spending more and more times on the gadgets and become dangerously lazy and stereotypes.