The One Man Communism 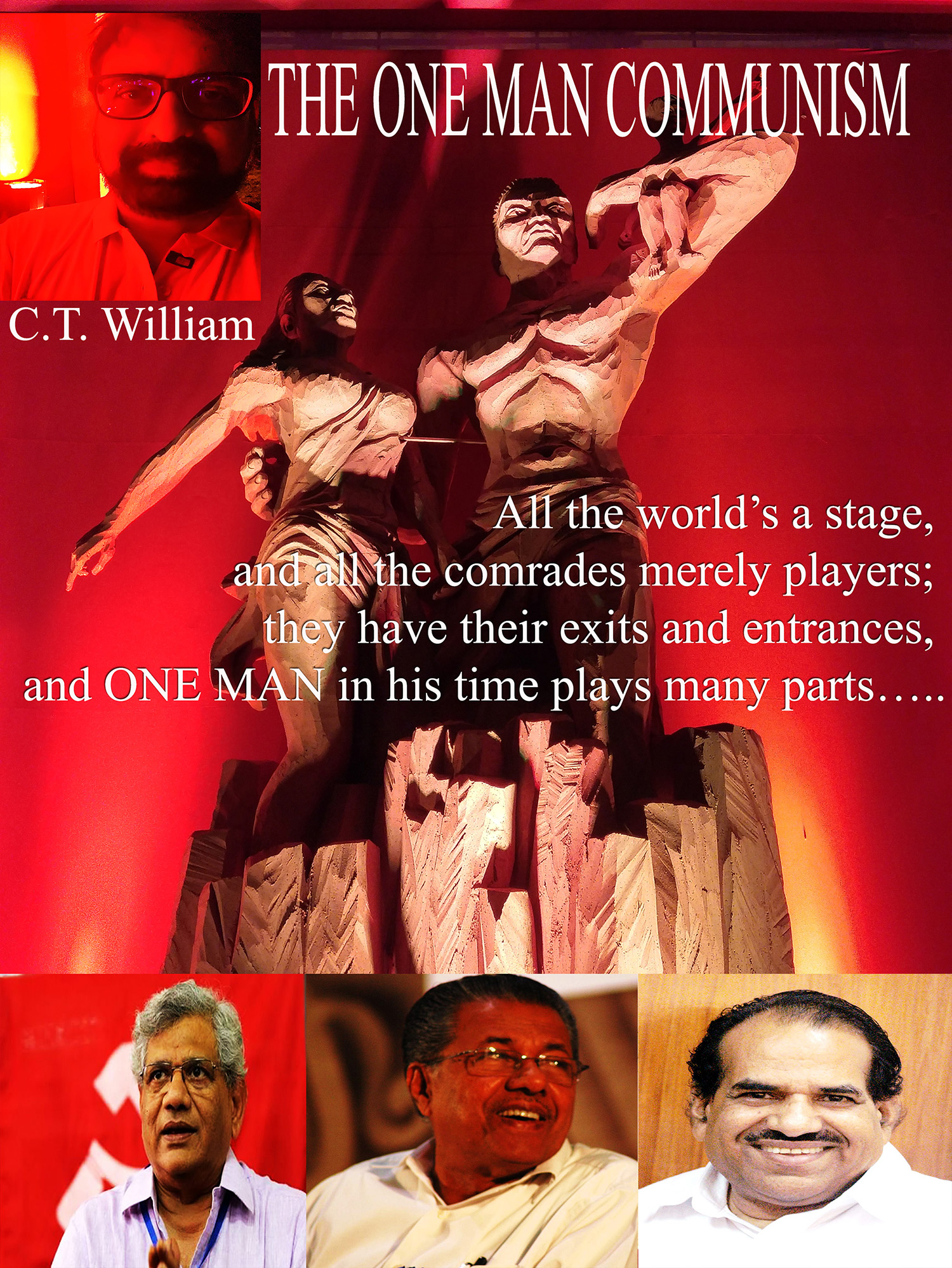 The State Conference of CPI (M) is vibrantly on in Thrissur, Kerala. The renowned cultural capital of Kerala, Thrissur is exclusively garlanded and almost transformed as the fabricated Red Fort of the Gods own country. The city is fully loaded with images and structures that disseminate communist ideological reflections. The comrades are all in a festive mood to witness the event that has come after long 37 years.

The CPI (M) party is undergoing for an enforced transformation in terms of its ideological and deep-rooted credentials once upon shouldered the party by its fore runners. The current party secretary Mr. Kodiyeri Balakrishnan is under the burning controversy that plotted by his two expatriate beloved sons. The issue however has been solved by Mr. Kodiyeri with the help of the party itself. A huge amount of money was illicitly floated into the furnace of controversy to settle it down. The party has taken indeed a challenging risky effort to settle the issue very before the State Conference. Now the nucleus of the controversy Mr. Kodiyeri as well as the party magnetic fields are maintaining equilibrium.

The inherent democratic corners of the party have started discussions to throw away the party secretary Mr. Kodiyeri Balakrishnan in the context of controversy that emerged out of wanton expatriate sons of Mr. Kodiyeri. The progressive democratic intelligentsia of the party has evidently focused on Mr. A.K. Balan, the Dalit comrade of the party. A few party comrades have also concentrated on the charismatic personality of the party Mr. P. Jayarajan of the Kannur arena. But these alternatives focussed to undermine Mr. Kodiyeri’s secretary-ship as known so far will not work.

As usual the war horse of the party Mr. V.S. Achuthanandan once again torpedoed by releasing an ultimatum that Mr. K.M. Mani should not be included in the left democratic front. But at the same time Mr. Pinaray Vijayan, the party’s unquestionable leader and the Chief Minister of Kerala has stealthily fabricated a militant formula to include Mr. Mani, the leader of Kerala Congress to the CPI (M) front. The other wild stallion of the party Mr. E.P. Jayarajan also supported for the inclusion of Mr. K.M. Mani in the party. At the same time Mr. Sitaram Yechury has recently revolutionised the future empowerment of the party by seeking alliance with the congress party. In fact some Pro-Yechury comrades supports Mr. Yechury’s revolutionary idea. At last the party has now become a mixed bag of opposites and controversies that might be discussed in the state conference.

While briefing the state conference in Thrissur, Kerala recently Mr. Yechury commented that the emphasis should be given to the policy frameworks that brings in Justice (Neethi) to people rather than emphasising on the Leaders (Netha) instead. He also inspired the comrades to speak out the issues straight and should not follow the silence (Moun) that made Manmohan Singh to Mounmohan Singh and that made Narendra Modi to Mounendra Modi while they supporting the grave financial frauds formulated by the Pro-Modi capitalists. Mr. Yechury here is indirectly establishing his own revolutionary idea of empowering the party by seeking alliance with the congress party. However he tactfully maintained the equilibrium to satisfy the Karat-Pinaray faction that convince the recent unpleasant incidents reported from Kannur; the action-packed nerve center of CPI (M) party in Kerala.

But the democracy of the CPI (M) is little larger and comrades there, are more equal. Where the democracy of the 463472 party members are forced to sacrifice their ethics and political credentials before the altar of the militant democracy of the Apex of the CPI (M) party. That is what we brand in other words as the Inherent Democracy of the party. The state conference is nothing but a ritual to be followed ceremoniously. The decisions have already been taken by the so called Apex of the CPI (M) party; may be the monolithic Pollitt bureau. It is so clear as crystal that the Apex of the CPI (M) party dominated by Mr. Pinaray Vijayan has declared the continuum of the Pinaray_Kodiyeri Chemistry in the next phase of the party ignoring the so called inherent democracy within the party. The inclusion of the Kerala Congress headed by Mr. K.M. Mani is also on the launching pad towards the exclusion of the CPI alliance.  The spectators are always the spectators whether they are enjoying a piece of art or a space where politics is performed. Yes; All the world’s a stage, and all the men and women merely players; they have their exits and entrances, and one man in his time plays many parts…..William Shakespeare is still alive.