“The honourable Court has nothing to do with illogical somniloquy”. Says Criminologist on Dileep Case 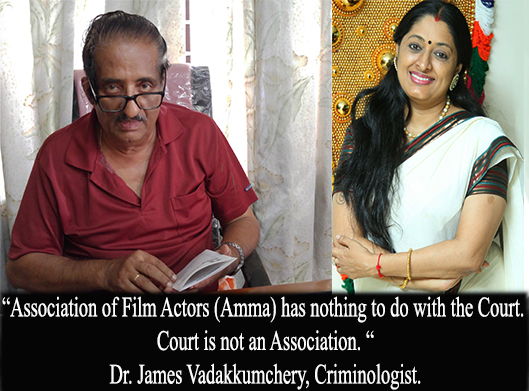 The Mallu Actor Dileep was accused in the case where an Actress was attacked in public by some people related with the film industry one and half year back. The trial is going on and recently Mr Dileep was demanding for a CBI enquiry in the case. While the case is still alive and be a burning issue, one Actress Urmila Unni has invited the Accused Actor to re-join the Association. All the other members of the Association have extended their full support with a roar of claps. At the same time another Association WCC has strongly protested this move through Facebook posts. The eminent Criminologist in the state, Dr. James Vadakkumchery has commented on this.

Dr. James stated that the Actor Dileep was expelled from the Association illegally without observing the rules and regulations concerned. Legally the member accused was to be served a memo on the issue. The member has the right to explain the situations that led to his accusations. Again if his explanations are found to be questionable, the case has to be investigated by an enquiry officer. And on the basis of the enquiry report the association has to proceed with their disciplinary actions. The accused has also the right to challenge the disciplinary actions taken in the Court. But in the case of Dileep these statutory proceedings are not observed; Dr. James stated.

In the said case of Mr Dileep some of the famous advocates who appeared for the major witnesses have left the scene recently. Some of the witnesses have strategically changed their minds too while on trials. In such situations, the Dileep case is now unpredictable; Dr. Vadakkumchery concludes.