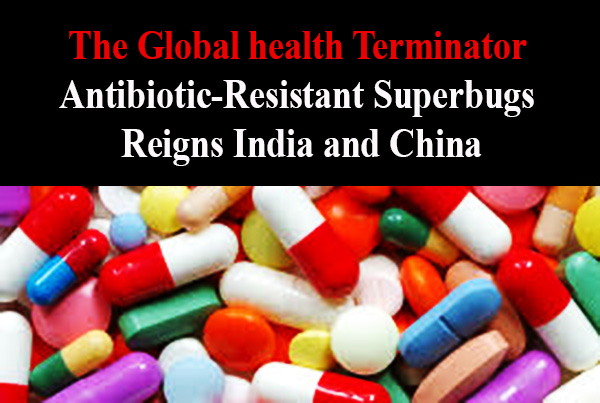 Antibiotic-resistant superbugs are terminators of global health. Ban Ki-Moon, UN secretary general recently cautioned the general assembly meeting that the problem has to be addressed with due concern. Otherwise, it will be difficult to provide universal healthcare and it will put the sustainable development goals in jeopardy.

India and China are considered to be the major producers of antibiotics. The discharge of untreated wastewater into soils and rivers is poorly regulated in these countries and it causes the spread of antibiotic ingredients which cause bacteria to develop immunity to antibiotics, creating superbugs.

Research says that the superbugs are able to travel quickly through air and water, aboard airplanes and through global food supply chains. By 2050, the total death toll worldwide as the result of contracting an infection that proves resistant to treatment is expected to reach 10 million people.

Many in the global pharmaceutical industry have called upon governments to collaborate on the threat of the increasing antibiotic resistance, through their Declaration on Combating Antimicrobial Resistance. But fails to achieve the goal of curbing environmental pollution in drug manufacturing

Ultimately, business diplomacy goes beyond corporate philanthropy and corporate social responsibility, by focusing on the deeper governance failures that threaten progress on sustainable development as well as the license to operate of global companies. Pharmaceutical companies now need to cooperate with governments, to root out pollution from their global supply chains.