The Disaster behind the Build Back Better Philosophy 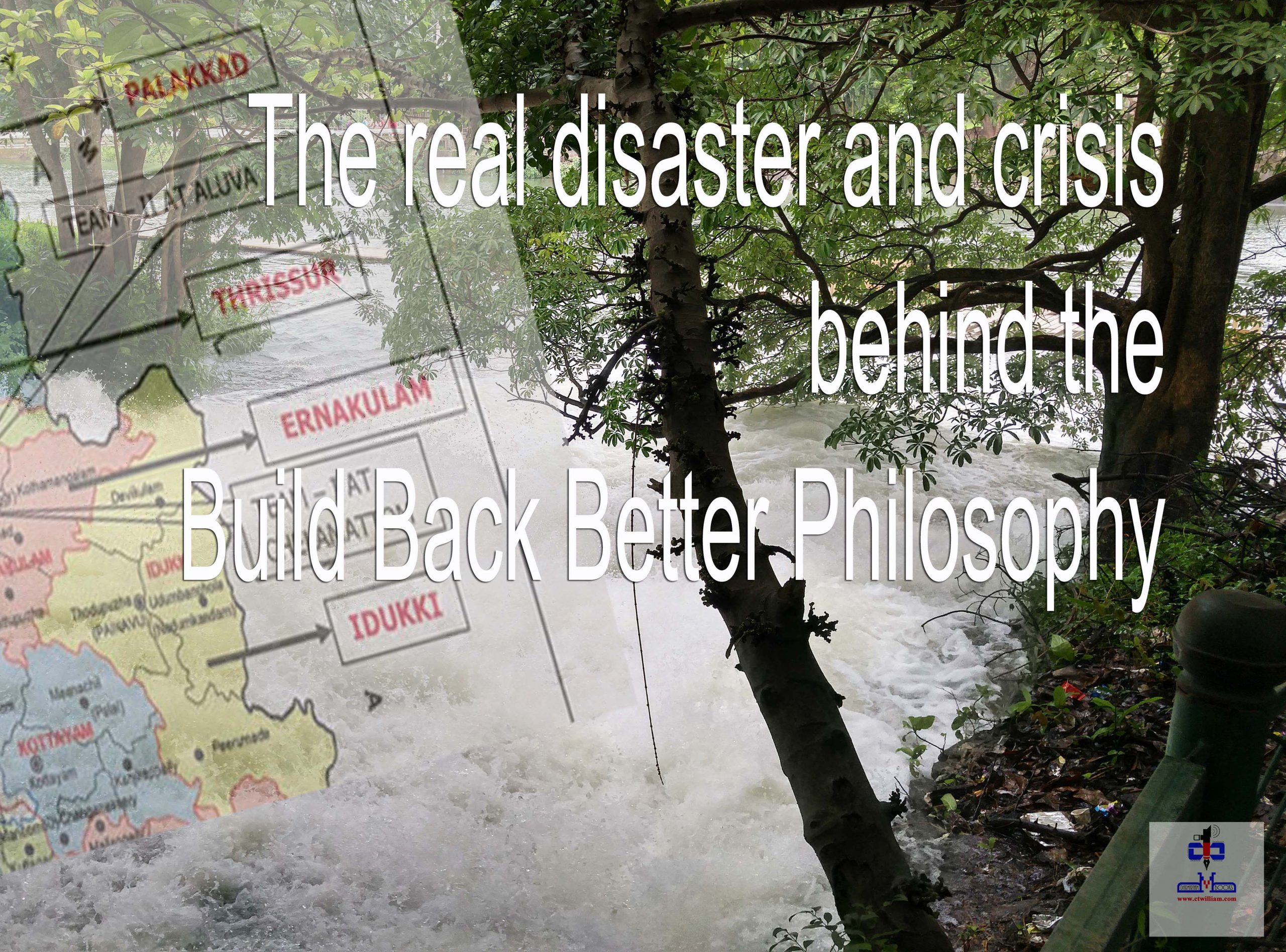 Devils of deluge have devoured the Gods own Country for a grave span of time. 55 lakhs of people were under the point of water cannons loaded by the devils of destruction. They were safeguarded in around four thousand relief camps. Approximately five hundred people were lost their lives. About 14 people were found missing. 15 lakhs of people from four lakhs of families were affected the lethal flood. Approximately the state is suffering from a material loss calculated to Rs.30000 crores. Drops of material assistance are showering over the Gods own space and it may bring an ocean of assistance to the needed community in Kerala.

The relief activities and the committed activists altogether have combated with the giants of flood and won the global honour for excellence. The Chief Minister of Kerala and his working colleagues have contributed their remarkable dedications in support of the forces of solidarity to regain the faith in survival and further to re-build a new and reformed Kerala. The opposition as usual has performed their worst to make advantage of the natural tragedy that befell on the state.

Like all catastrophes the great flood has also taught Kerala a lot. Kerala learned the relevance and role of nature in the environmental-ecological-sociological equilibrium of the state. Kerala for the first time become aware of the geographical and geological facts regarding the state. They were for the first time came to know that there are 40 rivers flowing in the state. They were for the first time to know that there are 80 dams in the state. They came to know that the river banks were grabbed by the political leaders and their goondas for a long time. They were aware of the fact that the flowing paths of the rivers were obstructed by the un-authorized constructions installed with the help of the political leaders either from the ruling party or opposition party. They have learned that the dams are not only for energy generation but they are to be opened in time when heavy downpours occur sabotaging the calculations of the weather forecasters and engineers. They too have learned about the disaster, disaster crisis and disaster management.

Now the dark clouds are vanished. Waters risen have disappeared. Flood-driven people have retuned. Dead are cremated in the watery coffins. Lost were not yet found. Relief camps were closed. Relief in the form of money and materials have been loaded our treasury. It is the money and materials of the people that accumulated by the people and for the people. Hence it has to be utilized as per the un-written rules and regulations of the democracy of the disaster. But now people began to fear of such democratic exercises and executions. Media, contemporary and social now have forgotten the aftermath responsibilities of the flood and are as usual involving in the nonsensical sensibilities. Now the ruling and opposition parties too have forgotten the aftermath responsibilities and social as well as democratic commitments. They were again be in the pathetic state of rulers and oppositions.

The hard-earned contributions in the form of money and materials for the sake of victims of disaster have to be preserved and well utilized. But instead politically sponsored and government structured money-mongering lobbies and agencies have rushed to our treasury batteries and started their occupational maladies. This is the real disaster that emerged as an after-shock. This is too the dilemma of the media and social critics that they are unable to expose this disastrous course of actions in public fearing that the same will mar the integrity of the state and the people. Exploiting this dilemma, the promoters of the post-disaster disasters continue their malicious motives and movements. This is the real disaster and crisis that could not be managed by the gospels of disaster management. This is too the real disaster and crisis behind the Build Back Better Philosophy.