The beauty of the “I, Me and You” and Adultery 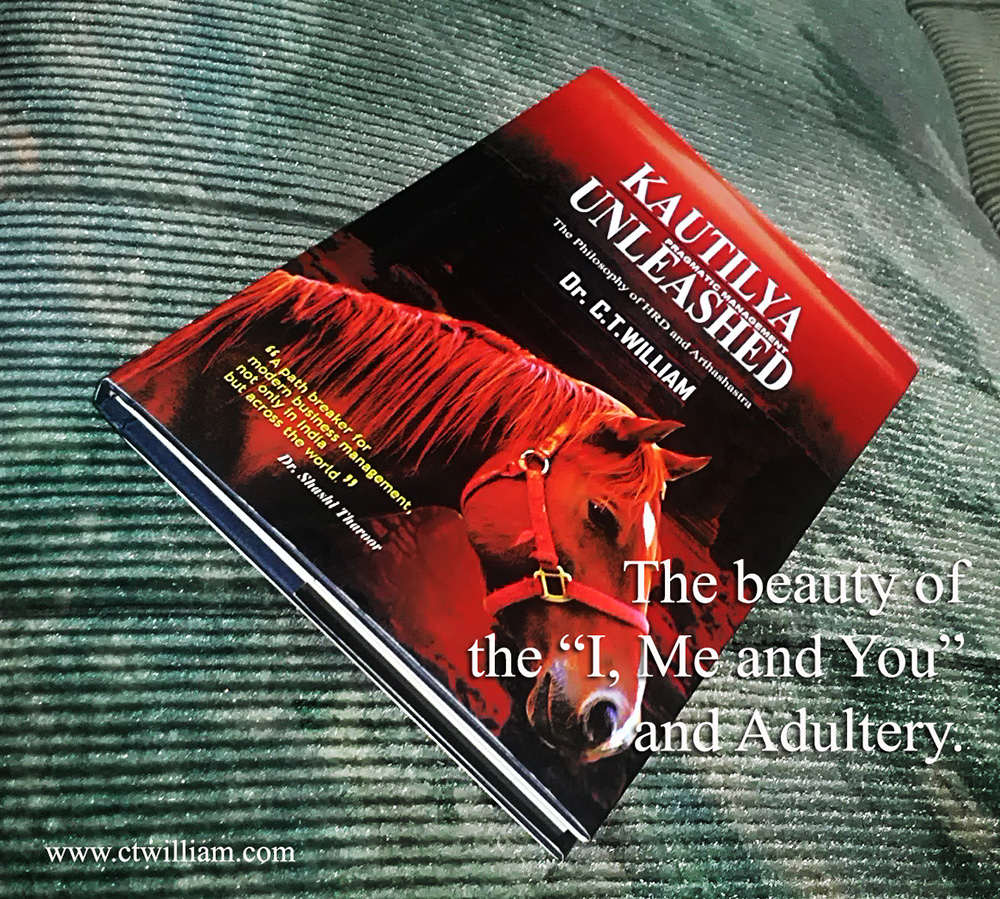 The honourable Supreme Court of India has proclaimed a historic judgement that adultery (IPC section 497) is no more a crime for it has seriously amounts to the violation of the right of equality of women in India. The Indian women no more a property of her Husband. A Husband has no right over her total being violating her freedom, the constitution ensured.

The judgement is applauded as historic but it questions the age-old relevance of Christian; Hindu; and Islam Philosophy and its sacraments and rituals. But the judgement is the inevitable repetition of the history for it keeps the continuum of the oriental philosophy structured in the Arthashastra of Kautilya.

The five-judge Constitution Bench comprising Justices R F Nariman, A M Khanwilkar, D Y Chandrachud and Indu Malhotra heralded by Chief Justice of India, Dipak Misra have examined the pre-Independence provision of adultery (Section 497) and finally proclaimed that a married woman no more be a commodity owned by her husband; violating the constitutional concepts of gender equality.

The petition was filed by Mr. Joseph Shine, from Kerala represented by the renowned advocates Kaleeswaram Raj and Suvidutt M.S., praying that the Section 497 has to be dropped from the penal code, as a criminal offence.

Section 497 of the Code mandates that if a man has sexual intercourse with another’s wife without the husband’s “consent or connivance,” he is guilty of the offence of adultery and shall be punished. The provision does not confer any right on the wife to prosecute her husband for adultery.

The Supreme Court after examining the case in detail and unanimously declared the section 497 of Indian penal code as unconstitutional, saying it was manifestly arbitrary and dents the individuality of women. The bench said, “We declare Section 497 IPC and Section 198 of Cr.PC. dealing with prosecution of offences against marriage as unconstitutional”.

However, CJI Dipak Misra said adultery can be a ground for divorce but not a criminal offence. CJI Misra and justice Khanwilkar also said mere adultery cannot be a crime, but if any aggrieved spouse commits suicide because of life partner’s adulterous relation, then if evidence produced, it could be treated as an abetment to suicide. The five-judge bench headed by CJI Dipak Misra said the beauty of the Constitution is that it includes the “I, Me and You”.

The Chief Justice of India also said that equality is the governing principle of a system and that a husband is not the master of the wife. Adultery might not be the cause of unhappy marriage, it could be result of an unhappy marriage, the CJI said.

Justice D Y Chandrachud called adultery offence as a relic of past and said section 497 is destructive of woman’s dignity and Self- respect as it treats woman as a private property of husband. Justice Chandrachud, in a section of the judgement titled ‘good wife’, said in the most private zone, choice is important and sexuality cannot be dissected from desire. Section 497 deprives women their choice about sexuality and hence it is unconstitutional.

Justice Chandrachud further added that a woman after marriage does not pledge her sexual autonomy to her husband and depriving her of choice to have consensual sex with anyone outside marriage cannot be curbed.

The lone woman judge Justice Indu Malhotra,in the constitution bench, too termed Section 497 as unconstitutional. Justice Malhotra said adultery is a moral wrong contrasting it with justice Chandrachud’s view that each spouse in marriage don’t mortgage their sexual autonomy to each other.

History repeats itself is now once again a proven fact. The honourable Supreme Court now after approximately 2300 years re-invented the philosophy behind Indian women recorded by the great Kautilya in his work Arthashastra. Hope that the philosophy would have helped the court to retranslate the wrong concept of adultery that existed for ages.

An excerpt taken from my own book on Arthashastra will tell the things clear.

“Women in Arthashastra have been provided with ample freedom, dominance and active participation in the administrative system without any discrimination over gender, colour or Varna scheme. Arthashastra allows widow remarriage and right to divorce, sabotaging the deep-rooted conventions enwrapped in fabricated or biased laws in the Smritis. “A widow without sons, who remains faithful to her [deceased] husband’s bed, shall enjoy, to the end of her life, her property, under the protection of the elders [of the husband’s family]. {Bk.3.Ch.2.Vs.19.}. “If a widow remarries after receiving all the above, she shall forfeit what was left to her by her [previous] husband and shall also be obliged to return the rest with interest” {Bk.3.Ch.2.Vs.20.}. Women have also been provided with dignified professional status in the society through employing them in the Department of Espionage, Income Tax, Defense and in the Bureau of Intelligence of the state. Arthashastra quotes, “Inside the city, they [Women as spies] shall search deserted houses, workshops, drinking places, vegetarian and non-vegetarian eating houses, gambling places and the quarters of heretics”. {Bk.2.Ch.36.Vs.13-14.}. “watch shall be kept over those who spend lavishly and those doing so in drinking houses without having known source of income”. {Bk.2.Ch.25.Vs.6.}.

Employment opportunities are also opened to them in the areas of agriculture as agricultural workers; in the areas of textile industry as weavers and spinners; in the areas of civil service as attendants; in the areas of breweries as blenders of alcohol; and in the areas of entertainments as Ganikas [prostitutes with a social cause and stature; for increasing revenue and for detecting crimes] or entertainers. Unlike Smritis Arthashastra entertains a free vision and innovative perspective on women as dignified individual, class and society.” (Kautilya Unleashed: Dr.C.T.William, Partridge, Chapter-5.)

The facts being so, this historic judgement will definitely have its reverberations in the socio-religious-political areas. The vote bank politics have their say in the coming days. The bargaining electorates will have their own say too in the coming days of elections.

The bible says, “You have heard that it was said, ‘You shall not commit adultery. But I tell you that anyone who looks at a woman lustfully has already committed adultery with her in his heart.” Matthew 5:27-28. At the same time Jesus on another occasion freeing the woman who committed adultery and put a message to the world, “Go and sin no more.” Again the gospel says, “Your adulteries and lustful neighings, your shameless prostitution! I have seen your detestable acts on the hills and in the fields. Woe to you, Jerusalem! How long will you be unclean?” Jeremiah 13:27

The Hindu philosophy Manusmriti says, “Those men who are addicted to intercourse with the wives of other men, the king shall banish after having branded them with terror-inspiring punishments.” Verse 8:352. The verse thus undoubtedly elaborates; When the king finds that a certain man is addicted to having intercourse with the wife of another person,—he should ‘brand’ him,—by cutting off his nose, for instance,—by means of ‘terror-inspiring’—sharp-edged weapons,—and then ‘banish’ him.

The Quran also have the same coercive approach towards adultery like that in Bible or Manusmriti. Quran reads; “The fornicatress and the fornicator, scourge you each one of them (with) a hundred stripes. And let not pity for them withhold you from enforcing the sentence of Allah, if you believe in Allah and the Last Day. And let a party of the Believers witness their punishment.”

However it is also commented that according to the conditions of persons, there are different judgments of fornication. In the said verse, only one of its cases is referred to, the case that if a celibate man or woman commits fornication, each of them will be flogged with one hundred stripes.

At the same time the holy Quran counts fornication as an indecency and horrible deed and prohibits it according to certain conditions. But the approach towards adultery is the same for ages.

To conclude we may say that the women community was wrongly or muscularly assessed by the texts and scriptures for ages. No body dared to break the social lock for ages. But now Supreme Court has broken it and the fragments are out with a bang that still resounds around us. Let us wait for the same to fade out or to form a beautiful symphony out of it.