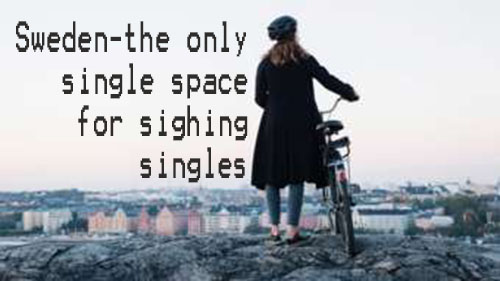 Sweden is the only space in the world for the singles. The expatriates dwell here are all singles and they enjoy the loneliness with their sweet duet living harmony. Sweden is frequently ranked among the most attractive locations in the world. Swedes are the best in the world at speaking English as a second language, which helps provide a soft landing for fluent expats.

Statistics say that in Sweden only one in four people relocated as singles had found a partner after five years. The study concluded that economic migrants from other Nordic and EU countries were even less likely to get together with a Swede.

Dr. David Schultz, American psychotherapist, observes; “A lot of my clients struggle with socializing here, in general. Swedish people don’t tend to talk to strangers much in public areas like the subway or buses or the supermarket,” he explains. “So it may feel like a lonely society to a foreigner.”

The country’s strong emphasis on gender-equality leaves women much less likely to depend on men financially. The average age for a first marriage is 33 for women and 35.7 for men. Childcare is highly subsidized here to enable mothers less dependent on having a partner to pitch in for income. Sweden’s divorce rate is the highest in the EU.

Despite the challenges of dating, Sweden’s magnetism for international talent is evident in the fact that the majority of single newcomers do stick around in the medium-term. According to Statistics, two thirds of those in who arrived without a partner between 1998 and 2007 were still living in the Nordic country after years.

Australian health economist and fitness entrepreneur Dan Paech, 32, confess, “I’m not sure I look at life in the same way as many Swedes…..I’m louder, more of a creature of chaos. I want to settle down, but I’m just not meeting anyone who makes me want to sit and live my life here forever.”