“Such threats don’t scare me. Do what you want; this is a free country.” Markandey Katju 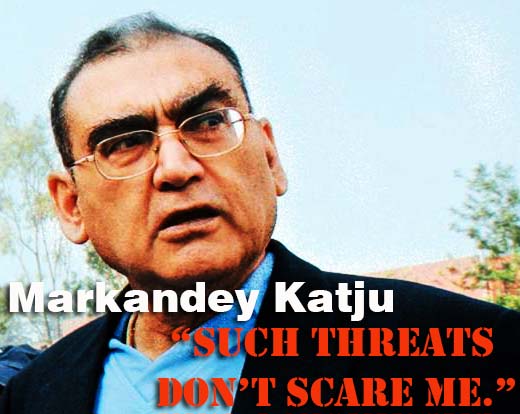 Markandey Katju, the former apex court judge blogged for the public that, “Yesterday in Gogoi’s courtroom, where I had come in connection with Soumya’s case, I had sat in the front row of lawyers, but I noticed that in the second row many people in plainclothes, who I later realized were security people, were sitting. Evidently Gogoi had shamelessly ordered them earlier to sit there (though those chairs were meant for lawyers), and Gogoi had pre planned to have me physically thrown out of the courtroom at some juncture. The whole ‘hearing’ in Gogoi’s courtroom was a drama, as I later realized. This is the shameless level to which people like Gogoi and others who planned all this drama can sink.” http://justicekatju.blogspot.in

Markandey Katju, the legal savior of people has been in news earlier several times.  While addressing a seminar organized by the South Asia Media Commission and subsequently in several articles and interviews Katju has said that “90 per cent of Indians are idiots” and “80 percent Hindus and 80 percent Muslims are communal”. He tried to justify his statement on the ground that 90% of Indians vote in elections on the basis of caste and religion and not on the merit of candidates, 90% Indians believe in astrology. Afterwards, three Lucknow students Tanaya and Aditya Thakur and Shivam Yadav had sent him a legal notice. He later clarified his remark by saying that it was meant to awaken people to the realities of social evils like casteism, communalism in the country.

The Supreme Court on 17 October 2016 summoned former judge Markandey Katju for insinuating that the top court had “grievously erred” by not imposing death penalty on Govindachamy in the Soumya rape-murder case. The Apex court has asked Katju to explain on 11 November 2016 how and where it went wrong in not imposing death sentence on Govindachamy. “He (Justice Katju) is a respected gentleman. We request him to come in person and debate his Facebook post criticizing the judgment. Let him come to the court and let’s debate over the fundamental flaws in our verdict,” a bench of Justice Ranjan Gogoi and Justice U U Lalit said and issued a notice to Justice Katju.

On 11 November 2016, the legal savior of people opened his argument quoting the title of a collection of essays in honour of the Supreme Court; ‘Supreme but not infallible’, seeking a review of the court’s verdict in the 2011 rape and murder Soumya, a woman in Kerala.

Through the dismissal of the said review petitions, the court stood by the acquittal of the lone accused, Govindaswamy, of murder charges and convicting him of only rape. The court also commuted the death penalty awarded to him to life imprisonment.

Even though the controversial review was dismissed, the Apex court has begun another controversy by issuing a notice of contempt to Katju for his remarks against the judges, criticizing them for their ruling in the case.

“The assault is on the judges and not on the judgement,” the Apex court said in its order, only minutes after thanking Katju for ‘assisting the court’ in its reviewing process.

Accepting the notice for contempt of court, Markandey Katju said that he was not scared. “Such threats don’t scare me. Do what you want; this is a free country”.

Markandey Katju was born on 20 September 1946 in Lucknow, British India, in a Kashmiri Pandit family. He topped the merit list of the Allahabad University’s LL.B. examination in 1967. He was awarded Honoris Causa a Doctor of Philosophy from Lal Bahadur Shastri Sanskrit University, New Delhi, for his book Mimamsa Rules of Interpretation, and a Doctorate of Law from Amity University. He is an Honorary Professor of Law at the National Law University, Delhi and Dr. Ram Manohar Lohia National Law University, Lucknow. Katju’s background is related to law and politics. His father was S. N. Katju, formerly a Judge of the Allahabad High Court. His grandfather Dr. Kailash Nath Katju, was one of India’s leading lawyers and participated in the country’s freedom movement. Dr. K. N. Katju was the Chief Minister of Madhya Pradesh, the Governor of West Bengal and Odisha, as well as the Union Law, Home and Defence Minister. Katju’s uncle was B.N. Katju, the Chief Justice of the Allahabad High Court.  The academic Tilottama Mukherji Tharoor, first wife of Shashi Tharoor, is a cousin to Katju. Her mother was the sister of Katju’s father.

He has a wide range of interests, including Sanskrit, Urdu, history, philosophy, science, and sociology, aside from his interest in jurisprudence.