Stigmatization is more dangerous than the Pandemic 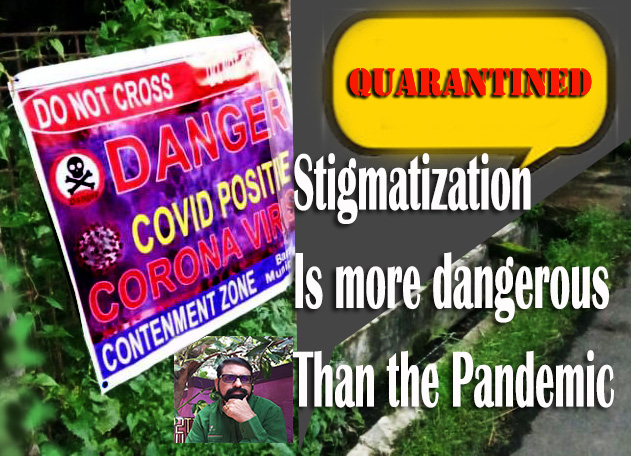 Swami Vivekananda is again proved true. The ever-branded district Kottayam, the land of alphabets and literature has gone mad. A group of people here under the leadership of an insane political leader has prevented the cremation of the dead body of a poor man, said to have died after Covid-19. A few days back in Northern Kerala, the man who delivered cooking gas at homes was reported to have terribly discriminated by the locals under the assumption that he is a covid-19 patient and a suspected career. At last, the man approached the local administration representative for the redressal of his grievance for being stigmatized by the local people whom he served.  The Panchayat member then took him and walked through the roads in public to show and prove that the man does not have any covid-19 infection.

This is not an odd incident that happened in Kerala, but happening all over India. The fear and stigma have devoured the people of India irrespective of their personal, social, or geographical statuesque. Reports are coming daily that several people are losing their lives due to the imposition of fear and stigma of Covid-19. Suicides of such kinds are increasing in India.

Stigmatization of such kind is more dangerous than the Pandemic. The government has taken a good effort to orient people for taking preventive measures to control the Pandemic. All media channels including that of the government have invested a lot to teach people how to wash their hands, how to sanitize, and even how to keep social distancing in their daily life. But no efforts have been taken so far to eliminate the fear and stigma that inflicted people related to Covid-19.

The government and media but every day highlighting the deadliness of the Pandemic and make people more and more fearsome and insinuate them to stigmatize the innocent victims of Covid-19. They are branding the people who are affected Covid as a dangerous and deadly species that have to eliminated or discriminated. They put boards such as “Danger, Covid ahead” and “Quarantined” in and around the virus affected areas.

Nobody dares to offer health-care services to the people who are under the suspicion of the contraction of the virus. There are incidences that the Health Department has sent an ambulance to such people but no health workers accompanied by the vehicle for the service of the patient. It is reported that often the vehicles are parked at a safe distance from their residence and forced the patient to reach the vehicles at their own effort.

The social psychologists and experts are appealing to the government to eliminate such tendencies of fear and stigmatization at the earliest possible. Otherwise, the government has to face problems that are more grave and deadly than the Pandemic.