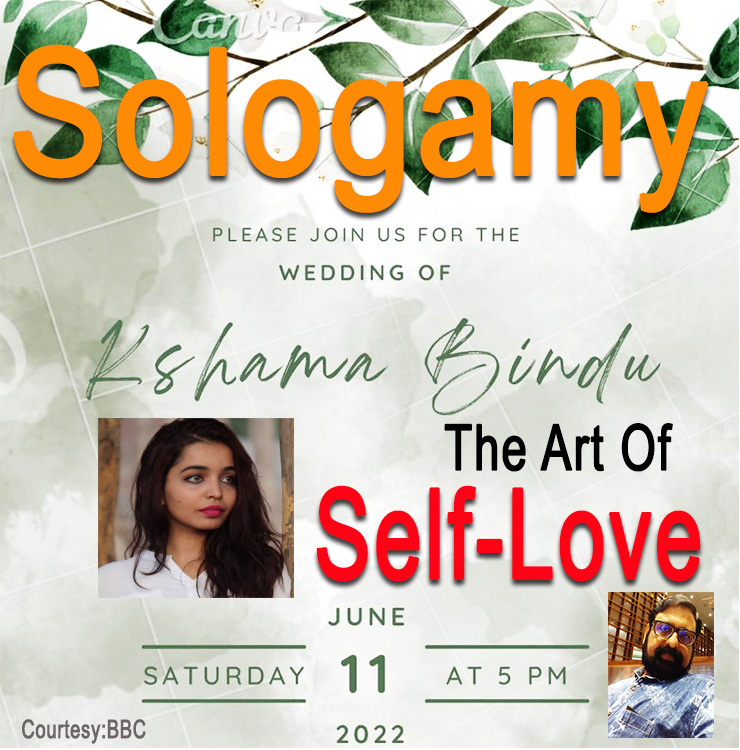 Kshama Bindu, the 24-year old sociology student and blogger from Gujrat said, “It’s my decision to marry who I want – whether it’s a man or a woman or myself.”

Bindu has become the spark to fire the unrevealed mystery of self-love. Yes, Kshama Bindu has ignited a revolution to normalize the novel concept of Sologamy-simply marrying oneself.

Adoring herself Bindu continued, “And by marrying myself, I want to normalise Sologamy. I want to tell people that you come into the world alone and you leave it alone. So who can love you more than yourself? If you fall, it’s you who are going to have to pick yourself up.”

Sologamy is an unprecedented wedding ceremony in India where people marry themselves. It has been a growing trend in the West over the past few years. Now, it has now reached Indian soil, BBC reports.

Kshama Bindu will marry herself enjoying a traditional Hindu wedding ceremony on the evening of 11 June 2022 in a temple in the city of Vadodara, in the western state of Gujarat. The historic invitation card to this strange wedding has become viral on social media.

After the historic wedding ceremony, she will fly to Goa for her honeymoon without a groom. Because it’s a Sologamy. For Bindu, her marriage is to dedicate her life to “self-love”. Sologamy or Self-Marriage will help one to grow and blossom into the most alive, beautiful, and deeply happy person, according to Bindu. It’s a kind of accepting one’s strengths and weaknesses whether physical, mental or emotional. It’s the deep act of self-acceptance, Bind said to BBC.

In her strange venture, Bindu is not alone but her family and friends are with her to encourage and promote her romantic adventure.

The idea of Sologamy is not new to the world. It has been once staged through the American drama series “Sex and the city”, where the character Carrie Bradshaw played the mystery of Sologamy. This comedy was then accounted for seriously in the world. Reports also said that there were some divorces in Sologamy. But it was Kshama Bindu who opened the Sologamy account in India.

The trend-setting Sologamy is now a hot debate among the Sociologists and Psychologists.