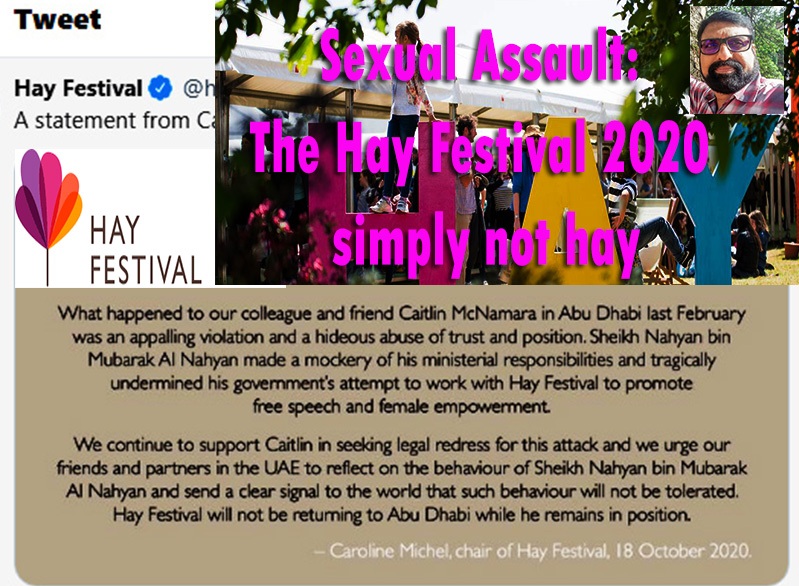 The historic and globally applauded Hay Festival scheduled to happen during October 2020 at Abu Dhabi was now in trouble. The Hay Chair, Caroline Michel painfully declares that the festival would not happen in Abu Dhabi due to the unpleasant tolerance of the Sheikh Nahyan bin Mubarak Al Nahyan of Abu Dhabi. As reported by the BBC, the Hay employee Caitlin McNamara was allegedly attacked by the Sheikh earlier this year and is seeking legal redress. However, Sheikh Nahyan, 69, has denied the allegations.

Ms McNamara, 32, told the media that the alleged attack happened on 14 February at a remote private island villa where she had been summoned by the Sheikh. Ms McNamara expected that she was summoned for the discussions regarding the Hay Festival to schedule to happen by October 2020. But Ms McNamara says that she had bitter experiences from the Sheikh.

Ms McNamara told her experiences both her employer and embassy officials soon after the incident and went to the police in the UK when coronavirus lockdown restrictions lifted. A statement to this effect was released by Caroline Michel, chair of Hay Festival through Twitter Tweet.

The history of Hay-On-Wye goes back to the period 1135-1147. But the name La Haye is used from 1299 onwards. By the 16th century onwards it was popularly known as the Hay. Since 1988, Hay-On-Wye has been the venue for the annual Literary Festival globally known as the Hay Festival. It is a festival of Literature and Music.

So many people believe that Hay Festival replaces the blissful season of Happy Christmas.   Now the blissful atmosphere was being spoiled for a senior Gulf royal has allegedly sexually assaulted one of their employees.

Ms McNamara said she has nothing to lose and is waiting to hear from the Crown Prosecution Service on her case. She is very much serious on the issue and emphasizes that such heinous acts from powerful men like the Sheikh should not happen here anymore. Ms McNamara says that she does not mind whether she was the first or last in the issue but it has hurt her both mentally and physically.

At the same time, a statement denying the allegation from London libel lawyers Schillings on behalf of the Sheikh reads that their client is surprised and saddened by the allegation, which arrives eight months after the alleged incident and via a national newspaper.

But the Hay Festival Chair, Chair Caroline Michel, said that what happened to their colleague and friend Caitlin McNamara in Abu Dhabi last February was an appalling violation and a hideous abuse of trust and position.