Protests and the Spike of the pandemic in the US 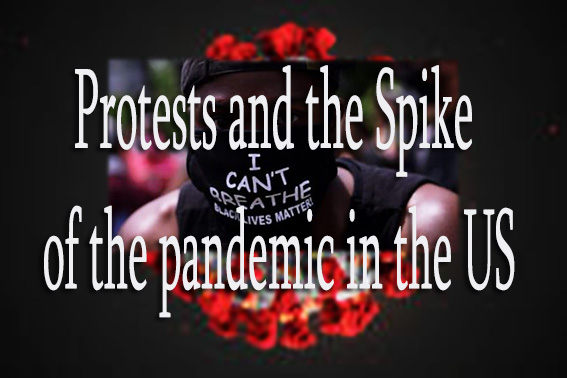 Now it has come true that the recent anti-racism protests in the US have escalated the pandemic cases in the US and now vitally back in the headlines. Several states have recorded a considerable increase in the number of cases in recent days that lead to fears of a second wave of the virus. The escalation is very much evident to conclude that the US has the highest number of confirmed cases in the world i.e., more than two million that come to about a quarter of the global infections.

However, Vice-President Mike Pence has rejected the allegation and said that those initial fears about the pandemic were “overblown” and he also accused the media of using “grim predictions” to scare the American people. Anthony Fauci, the US health official for infectious diseases also has the opinion that the current situation as a continuation of the initial outbreaks and denies the reports that there is a second wave.

But the facts speak a different story. The situation was really adverse in late March but by May the cases were declined and most of the states have begun to lift the restrictions. On 25th May 2020, when George Floyd was killed, the US has only 1718776 cases and as of today, after 25 days the cases have been spiked to a 2297190-an increase of 578414 cases. Analysts say that this is due to the anti-racism riots and protests that staged all over the US where the protesters could not observe the preventive cautions against the pandemic.

President Donald Trump, in fact, alleged that masks have been politicized in recent days in the US and some people are wearing it primarily to show opposition to him.