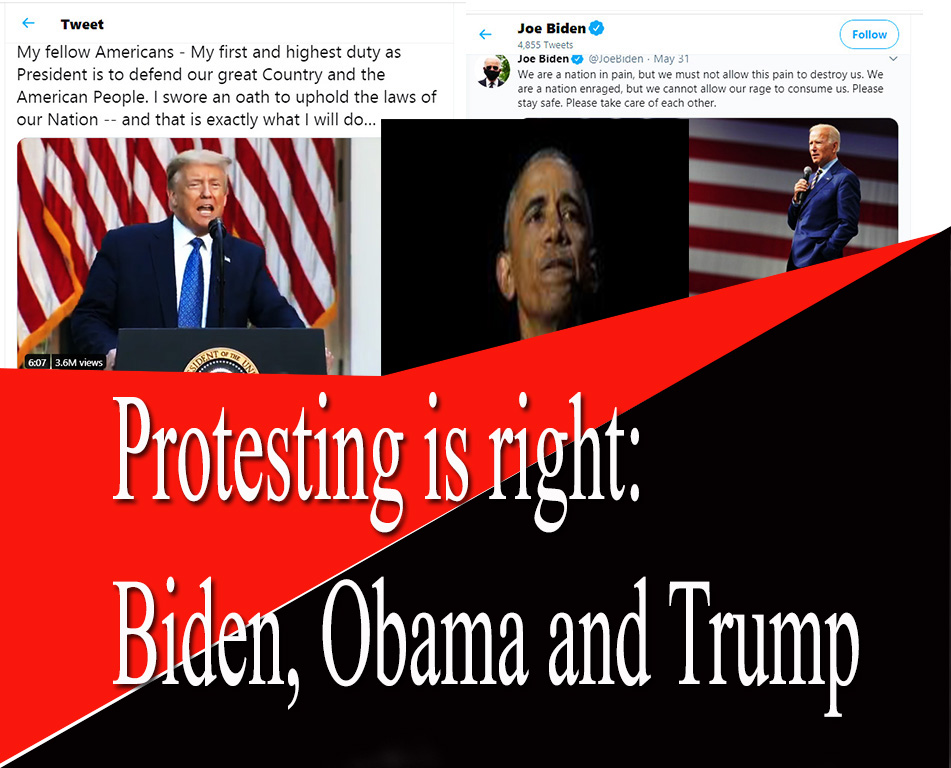 America is burning. And social media is adding more and more fuel to make the burning worse. This is not the tragic situation that staged only in America but the same situations are going on in almost all countries. This is due to the intentionally sensitive and wrongly applied social media activism. To make matters worse, Trump has openly waged war against the parallel interfering mechanism of the social media platform in the Government machinery. This has to be viewed seriously by all governments irrespective of their political ideologies and commitment to the people. Negligible sparks are often ignited by social media activists to destructible fires that consume the whole country. At the same time, it is doing a lot of humanitarian and democratic services to the people as well as the governments.

Joe Biden said that the act of protesting should never be allowed to overshadow the reason we protest. It should not drive people away from the just cause that protest is meant to advance. People across this country who are suffering the loss of a loved one to intolerable circumstances, like the Floyd family, or to the virus that is still gripping the nation. Suffering economic hardships, whether due to COVID-19 or entrenched inequalities in the American system.

Barack Obama has also rightly reminded the Americans some basic lessons to draw from the past efforts that are worth remembering. The first lesson he reminds of is that the waves of protests across the country represent a genuine and legitimate frustration over a decades-long failure to reform police practices and the broader criminal justice system in the United States. The overwhelming majority of such participants have been peaceful, courageous, responsible, and inspiring. They deserve our respect and support, not condemnation.

Secondly, he reminds that the point of protest is to raise public awareness, to put a spotlight on injustice, and to make the powers that be uncomfortable; in fact, throughout American history, it’s often only been in response to protests and civil disobedience that the political system has even paid attention to marginalized communities. But eventually, aspirations have to be translated into specific laws and institutional practices, and in a democracy, that only happens when we elect government officials who are responsive to our demands.

Moreover, he reminds that when we think about politics, a lot of us focus only on the presidency and the federal government. And yes, we should be fighting to make sure that we have a president, a Congress, a U.S. Justice Department, and a federal judiciary that actually recognizes the ongoing, corrosive role that racism plays in our society and want to do something about it. But the elected officials who matter most in reforming police departments and the criminal justice system work at the state and local levels.

It’s mayors and county executives that appoint most police chiefs and negotiate collective bargaining agreements with police unions. It’s the district attorneys and state attorneys that decide whether or not to investigate and ultimately charge those involved in police misconduct. The fact that who wins and who loses those seats are often determined by just a few thousand, or even a few hundred, votes.

So the bottom line is this: if we want to bring about real change, then the choice isn’t between protest and politics. We have to do both. We have to mobilize to raise awareness, and we have to organize and cast our ballots to make sure that we elect candidates who will act on reform.

Finally, we should know that every law enforcement agency should have clear policies, including an independent body that conducts investigations of alleged misconduct. Tailoring reforms for each community will require local activists and organizations to do their research and educate fellow citizens in their community on what strategies work best. Barack Obama finally inspired people to get on with such works for the country.

Trump also concluded the same but in a more militant and eccentric manner as usual. He said, that the state governors would look like “jerks” if they didn’t get a handle on their cities.

They have to dominate, if they do not it is just wasting their time. He told the local officials that they must “get tougher” in managing the protesters, “track people” and put them in jail for ”10 years” so “you’ll never see this stuff again”. Trump concluded, “I’m not a believer in flag-burning, and I would think that if a state wanted to try to pass a law that you’re not allowed to burn flags.