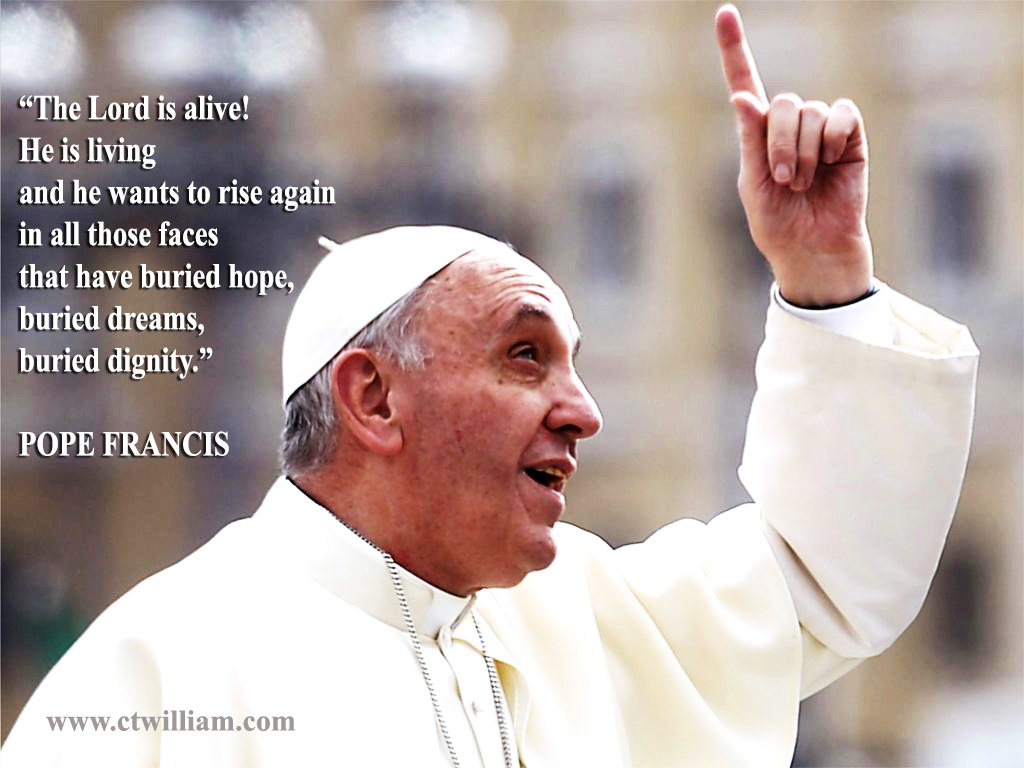 “The Lord is alive! He is living and he wants to rise again in all those faces that have buried hope, buried dreams, buried dignity.”

At 8:30 pm on Holy Saturday evening, Pope Francis presided in the Vatican Basilica at the Solemn Easter Vigil in this holy night. The ritual began in the atrium of St. Peter’s Basilica with the blessing of fire and preparation of the paschal candle.Then the Pope proclaimed his Easter Gospel.

“After the Sabbath, as the first day of the week was dawning, Mary Magdalene and the other Mary went to see the tomb” (Mt 28:1). We can picture them as they went on their way… They walked like people going to a cemetery, with uncertain and weary steps, like those who find it hard to believe that this is how it all ended. We can picture their faces, pale and tearful. And their question: can Love have truly died?

Unlike the disciples, the women are present – just as they had been present as the Master breathed his last on the cross, and then, with Joseph of Arimathea, as he was laid in the tomb. Two women who did not run away, who remained steadfast, who faced life as it is and who knew the bitter taste of injustice. We see them there, before the tomb, filled with grief but equally incapable of accepting that things must always end this way.

If we try to imagine this scene, we can see in the faces of those women any number of other faces: the faces of mothers and grandmothers, of children and young people who bear the grievous burden of injustice and brutality. In their faces we can see reflected all those who, walking the streets of our cities, feel the pain of dire poverty, the sorrow born of exploitation and human trafficking. We can also see the faces of those who are greeted with contempt because they are immigrants, deprived of country, house and family. We see faces whose eyes bespeak loneliness and abandonment, because their hands are creased with wrinkles. Their faces mirror the faces of women, mothers, who weep as they see the lives of their children crushed by massive corruption that strips them of their rights and shatters their dreams. By daily acts of selfishness that crucify and then bury people’s hopes. By paralyzing and barren bureaucracies that stand in the way of change. In their grief, those two women reflect the faces of all those who, walking the streets of our cities, behold human dignity crucified.

The faces of those women mirror many other faces too, including perhaps yours and mine. Like them, we can feel driven to keep walking and not resign ourselves to the fact that things have to end this way. True, we carry within us a promise and the certainty of God’s faithfulness. But our faces also bear the mark of wounds, of so many acts of infidelity, our own and those of others, of efforts made and battles lost. In our hearts, we know that things can be different but, almost without noticing it, we can grow accustomed to living with the tomb, living with frustration. Worse, we can even convince ourselves that this is the law of life, and blunt our consciences with forms of escape that only serve to dampen the hope that God has entrusted to us. So often we walk as those women did, poised between the desire of God and bleak resignation. Not only does the Master die, but our hope dies with him.

“And suddenly there was a great earthquake” (Mt 28:2). Unexpectedly, those women felt a powerful tremor, as something or someone made the earth shake beneath their feet. Once again, someone came to tell them: “Do not be afraid”, but now adding: “He has been raised as he said!” This is the message that, generation after generation, this Holy Night passes on to us: “Do not be afraid, brothers and sisters; he is risen as he said!” Life, which death destroyed on the cross, now reawakens and pulsates anew (cf. ROMANO GUARDINI, The Lord, Chicago, 1954, p. 473). The heartbeat of the Risen Lord is granted us as a gift, a present, a new horizon. The beating heart of the Risen Lord is given to us, and we are asked to give it in turn as a transforming force, as the leaven of a new humanity. In the resurrection, Christ rolled back the stone of the tomb, but he wants also to break down all the walls that keep us locked in our sterile pessimism, in our carefully constructed ivory towers that isolate us from life, in our compulsive need for security and in boundless ambition that can make us compromise the dignity of others.

When the High Priest and the religious leaders, in collusion with the Romans, believed that they could calculate everything, that the final word had been spoken and that it was up to them to apply it, God suddenly breaks in, upsets all the rules and offers new possibilities. God once more comes to meet us, to create and consolidate a new age, the age of mercy. This is the promise present from the beginning. This is God’s surprise for his faithful people. Rejoice! Hidden within your life is a seed of resurrection, an offer of life ready to be awakened.
That is what this night calls us to proclaim: the heartbeat of the Risen Lord. Christ is alive! That is what quickened the pace of Mary Magdalene and the other Mary. That is what made them return in haste to tell the news (Mt 28:8). That is what made them lay aside their mournful gait and sad looks. They returned to the city to meet up with the others.

Now that, like the two women, we have visited the tomb, I ask you to go back with them to the city. Let us all retrace our steps and change the look on our faces. Let us go back with them to tell the news, in all those places where the grave seems to have the final word, where death seems the only way out. Let us go back to proclaim, to share, to reveal that it is true: the Lord is alive! He is living and he wants to rise again in all those faces that have buried hope, buried dreams, buried dignity. If we cannot let the Spirit lead us on this road, then we are not Christians.

Let us go, then. Let us allow ourselves to be surprised by this new dawn and by the newness that Christ alone can give. May we allow his tenderness and his love to guide our steps. May we allow the beating of his heart to quicken our faintness of heart.