Not The Parrot; The Crusader Is Soaring High 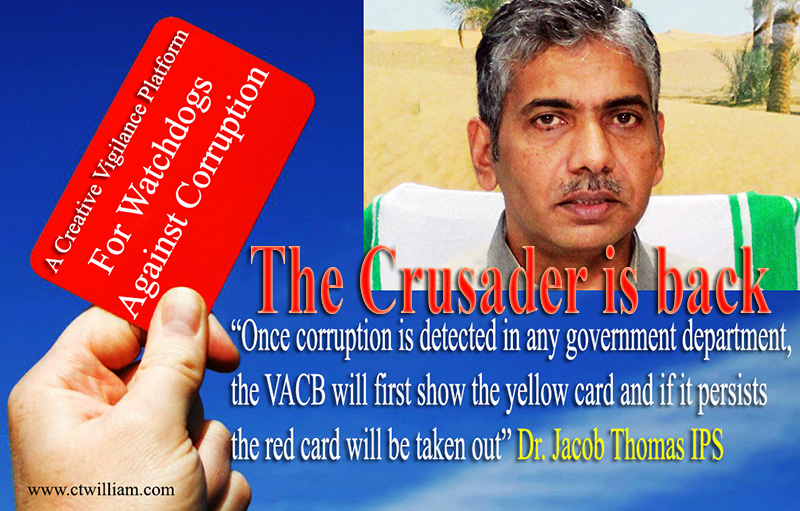 At last the Vigilance Parrot was out. Dr. Jacob Thomas, the brave vigilance director symbolically synonymized as Parrot was out breaking the mesh of the cage with the support of the Chief Minister of Kerala Pinaray Vijayan.

It was recently in Communist China the central committee for discipline inspection, the party’s corruption watchdog, has released the embarrassing statistics that more than one million officials have been punished for corruption since 2013.

Now the Chinese vibrations have its resonance in Kerala. Dr. Jacob Thomas the gallant director of Vigilance and Anti-Corruption Crusader has started his revolutionary mission of hooking the corruption suspects from high-ranking civil service officials to the ministers. We may also expect not less than one million of corrupt officials here too.

Dr. Jacob Thomas, the DGP ranked IPS rebel Police officer has his uncompromising Anti-Corruption Crusade in Kerala since his induction to the service and the disinterested corruption-pro opponents have gifted him multiple transfers in his career.

When he started his challenging crusade against the corrupt officials and ministers of the United Democratic Front Government under the chief Minister Umman Chandi, dishonored him calling “Anti-People” and transferred him with degradation.

The outraged Chandi even dared to comment to the extent that, “This official (Dr. Jacob Thomas) who was transferred had on few occasions put the government into trouble through his actions…..and there were numerous complaints against this official. We are not interested in such changes that Dr. Thomas Jacob has introduced.”

The brave Dr. Jacob Thomas but applied for the copies of the “numerous complaints” against him as stated by the outraged Chief Minister, Umman Chandi through RTI. But Umman Chandi failed to furnish any reply against his RTI query. In this context, Dr. Jacob Thomas tried to expose Mr. Chandi, but the Chandi supporters and bureaucrats sabotaged his attempt.

Now Mr. Pinaray Vijayan, Kerala Chief Minister has given him full freedom to exercise his responsible job to hook all the corruption suspects in the state and to make corruption-free Kerala. Let the brave parrot soar high over Kerala for keen observation and investigation.