The sixth block abode in the waterways of Kerala House boats in between Alleppey and Kumarokom perhaps will be a hot spot of inquiries and investigation in nearest future due to either House Boat or Hooch tragedies.

All House Boats that are surfing either from Alleppey or Kumarokom will have their anchorage at the so called tempting point at the sixth block waterway. The boats will reach here around noon for a short break and relaxation. The inmates of House Boats will rush to the sixth block vender for the satiation of their temptations.

The venders at the sixth block home stay will be very busy enough at that time even to attend either the crew of the boat or the tempted inmates. All prayers of the devotees of the sixth block venders have the common prayer for obtaining either Kerala’s own toddy or hooch. Nowadays the devotees have been multiplied due to the restrictive liquor policy of the state.

The tourists will sometimes bring some liquor painstakingly from the land and it will be exhausted soon after a half-time cruising. The tantalizing nature and thrilling waterways will unleash their temptations for more nectar will bring them at last before the sixth block vender.

The vender will be very much busy with their own restaurant and customers at their peak hours of business when the devotees rush for having offerings from the vender. However the Vender-God will offer them with the liquor of temptations; toddy or hooch without any restrictions as the governments adhere to.

The government’s adamant liquor policy and tourism policy will comfortably and conveniently be blind for some time and abundant quantities of adulterated toddy and hooch will flow profusely to these House Boats. There is no qualitative checks and insurance for this mortal liquor of temptations. At some point of time Gods Own Country will have to listen to the outcries of the hooch victims and the weeps and sighs of their dears and nears; if the government continuing their pretended or conscious blindness.

The details of the tourists who are cruising in these House Boats are not called for either by the House Boat Owners or the Tourism departments under which these Boats are said to have been regulated. We could not find any coast guards or police or excise people in and around these waterways. If something tragic happens to the tourists due the pretended blindness of the government, we have no solace but to blame upon the helplessness and fate of the tourists.

In the preamble of the guidelines for preservation and conservation of tourism issued by the Kerala State Tourism Department, it is stated; “The houseboats holidays of Kerala are increasingly becoming popular with domestic as well as internation 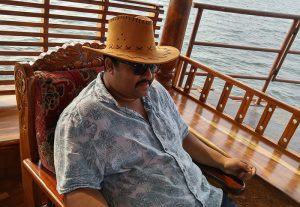 al tourists. Consequently, the number of houseboats plying the backwaters of Kerala has increased dramatically. So much so that there is an urgent need to evaluate the safety and service standards of houseboats and classify them accordingly. This will be the first step towards sustaining this unique tourism product.

These guidelines are designed to provide criteria for classifying the houseboats in Kerala, an initiative that will once again make Kerala pioneer in the tourism industry in India so far as emphasis on quality goes.

But the fact is that we could not find these guidelines observed in any of the House Boats; hence the Gold Star or Silver Star is not visible to either the tourists or the department.

Now the season for House Boat Tourism has started. Let us pray for peaceful backwater tourism without any unpleasant tragedies either of our hundreds of Boats non-regulated or the Hooch over it they surf. God of our God’s country may bless our tourists.