It’s not the Story of Nun; but None 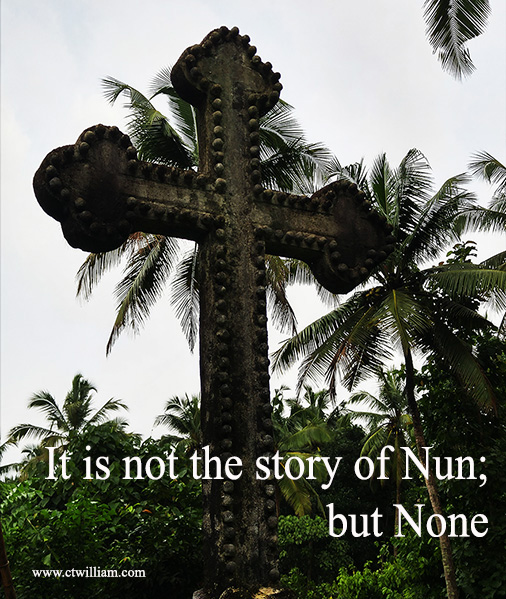 At last Punjab, Jullundur Bishop Franco Mulakkal, the accused of raping a Kerala Nun was recorded as arrested. Naturally the coming days will witness a legal battle within the Christian Church and factional battle in the political corridors of Kerala. The historical arrest of the Bishop was recorded after filing the case for three months and being questioned him by the Kerala Police for three days.

Bishop Franco Mulakkal was arrested for allegedly raping the Kerala Nun multiple times between the year 2014 and 2016 at a convent in Kuruvilangad, Kerala and also at different places. The inevitable action by the Kerala Police was taken against the 54-year-old Bishop amidst the protests by a group of nuns in support of the accused nun along with the various Catholic reform organisations and many other organizations that stood for the cause of women.

Anticipating the seriousness of the crime, the bishop had moved for an anticipatory bail in the high court some days back, claiming that all the charges loaded against him were a “cooked-up story to wreak vengeance”. But the HC had adjourned the hearing of the application accordingly.

Claiming innocence, the bishop further emphasized that the nun’s complaint was “nothing but a fictional story”. “The complaint is an afterthought and a vicious programme to bring down the applicant who is holding a very high post in the congregation,” his anticipatory bail plea stated. The bail plea further reads that the bishop is “absolutely innocent” and has been “falsely implicated” in the case with an “ulterior motive and vexatious intention”.

On the other hand, the nun, the victim and the center of the controversy had appealed for urgent intervention of the Vatican for justice and demanded the removal of the accused Bishop Franco Mulakkal from the throne of the Jullundur diocese. She further questioned why the church was “closing its eyes to the truth”.

It was an event unprecedented in the history of church where a nun had showed extraordinary mettle to address her grievances and sexual harassment that she suffered from the holy men within the church, in public. She had alleged that Bishop Franco Mulakkal was applying his “political and money power” to “bury” the allegations filed against him.

The nun had evidently accused the Bishop of sexually assaulting her repeatedly between the year 2014 and 2016. The bishop, in fact, dismissed the allegations as “baseless and concocted”. The Bishop also questioned the integrity of the nun leveling charges against him and also commented the act as vengeance since the Bishop had rejected her demand for favours. It is interesting to note that the Bishop never made any sort of confessions during the long 72 hours questioning in a hi-tech interrogation cell. But relying upon the personal statements of the victim and in support of the circumstantial evidences, the Bishop was at last arrested by the Kerala Police in dramatic manner.

Though the case was burning in the public the tragic flood situations made it dormant for some time and was flamed again soon after the flood situation turns normal. It was the veteran politician Shri. P.C George at first made exceptional comments that questioning the integrity of the victim in this case. Later on he apologized as usual and quit the stage of controversy. Afterwards the CPI (M) spokesman Shri Kodiyeri Balakrishnan also commented that the BJP and Congress Party were taking advantage of the nun’s case and playing cards of communal disharmony. Later on other CPI (M) spokespersons issued justifiable statements supporting the victim and rejecting the comments of Shri Kodiyeri Balakrishnan. The issue was further burnt live by the retired Justice Kemal Pasha criticizing the Kerala Police and the Government for their purposeful and plotted negation of the case.

The case as expected have moved to the court and will have its own revolutionary implications in the coming days. The Bishop may be put in jail or not; does not make any solutions for the revolutionary impacts that badly affects the socio-political dimensions in Kerala. The implications will badly affect the political equilibrium of Kerala probably on the eve of coming elections. Some of the political party will certainly take advantage of this situation and the same is unpredictable at this point of time. The bone of contention however will be the Christian vote bank.

The Church will also has to face a crucial situation of existence. The structure of Church hierarchy is found broken. The basics of Christian faith is questioned. The relevance of confession is at stake. The domain of clergymen is broken. The existence of monastery is also at stake. The future of nuns will be a puzzle and dilemma. The solidarity of Nuns is also at stake. Who will take care of this shattering community? Can the government take care of them and rehabilitate them. Can any political party or NGO could help them? No doubt, the species of nuns may extinct in future. The faith of the Christian is too at stake. The existence of church will be too risky. The new Christian generation will think twice before believing the Church and its People.

One more Jesus Christ has to be born and crucified for the sins committed by the New Generation Christians. Yes, it’s a time for reformation, renaissance and reorganization for the Church and the State. We have so many limitations to blindly believe the story as a simple story of a simple nun; because it’s a story particularly of none but everyone that matters.