It’s not Democracy but Demon-crazy 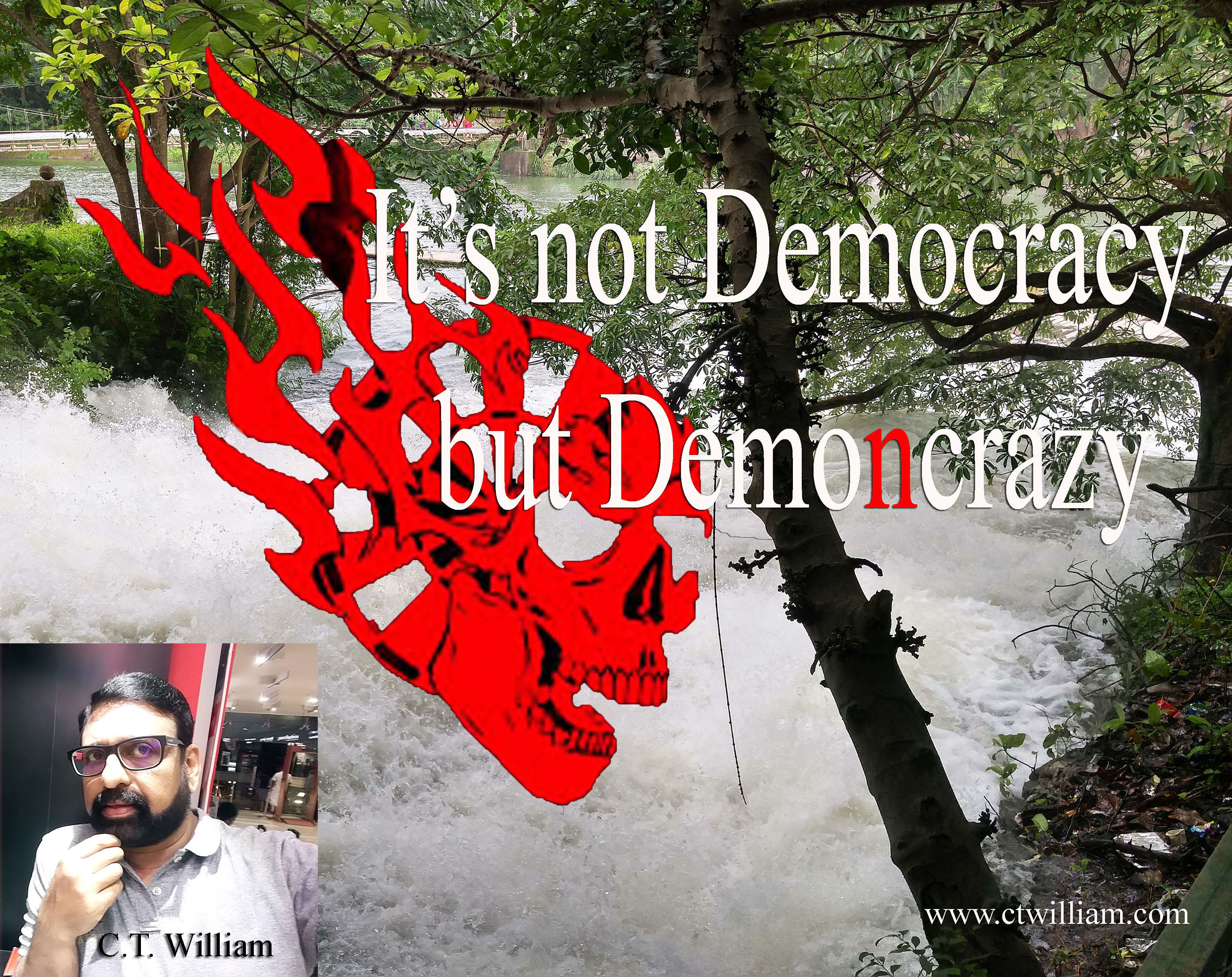 Kerala has witnessed two major floods ironically to wipe out the blunt attitudes and blunders of the Global Keralaites. The Keralites are super-egoistically proud of their exceptional knowledge under the sun. But on analysis one should infer that these people have only limited poor knowledge; which is indeed dangerously virtual, that they carelessly earn from their hearsay environment and some other incomplete knowledge that they download from the cyberspace. It is pitiable that they used to upload these incomplete and unauthenticated knowledge to their own virtual space as their own intellectual property. It is so pathetic that the super-egoistic Keralites even after the recent flood learn nothing from the experiences and disasters. In fact they are after the vibrant flags coloured red, white, green, saffron and lot of other colours too, that have divided Kerala into incompatible political fragments.

The Keralaites generally balloons their head with the knowledge that they acquire from social media universities. Seating comfortably locally or officially, they retransmit these cyber knowledge from their palmtops and laptops to the universe via face books, whatsapps and you tubes. Our responsible print-visual-audio media are also doing the same dissemination of readymade useless knowledge.

It’s a terrible fact that our mathematical process of addition, subtraction, multiplication and divisions are now done not by the common human intelligence but by the artificial intelligence of the gadgets that launched by the giants of information technology. To put it in brief that our innovated technology is not addressing the natural welfare needs of the humans but the technocratic needs of the technocratic society. The technocratic society in real are fragmenting our society into watertight compartments on the basis of religion, caste, creed and politics for boosting the business of technocracy.

Our political fronts such as left, right, middle and even the extreme left-right-middle fronts of its kind seek abode in the cyber mathematical sphere. They find different right answers for the same questions. They are frenzied in their own right answers. They in fact transmit and retransmit their right answers to the society that has been loaded and confused with questions. These right answers in turn divides and sub-divides the society on the basis of religion, caste, creed, colour, language and politics. This disharmony destroys their human and humane attitudes and at last demonized anarchy is emerged. We may call it Demon-crazy instead of Democracy.

Witnessing all these calamities, the impassive Keralites crazily played their fingers on their glossy display panels of the smart phones. And the second flood rushed in untimely and unnoticed by either the monsoon or the conventional climatology. The Western Ghats that was raped and injured by the Keralaites gently protested. The Gods Own Puthumala and Kavalapara were toppled down. Demonic floods are but simple drizzling for the demons of Demon-crazy. They viewed the perils of floods over sky and through sun glasses of luxurious flying and plying machines. They patted on the cheeks and shoulders of the living dead’s. The flood was once again celebrated. The doors of begging were once again inevitably opened before Demon-crazy.

The electoral roll was once again revised. They deleted the voters eaten up by the demonic flood. The politicians were relieved and happy for they need not mount the hills and mountains for votes. Demon-crazy was once again active in its full-fledged manner with its eternal slogan of “Survival”.

The Keralites still not yet identified the gravity of floods and disasters. They in fact turn their faces from those who have identified and signalled the gravity of the natural disasters and floods. The demons and serpents of politics who unleashed the disasters are still dancing with their raised heads and hoods. And the Keralites endlessly cyber-pipes for those demons and serpents through the social media. We always put on our masquerades of anti-fascism and treads through the inauspicious paths of stereotypic “survival” and again and again be the part and parcel of Demon-crazy.