How New Zealand Unmasked against Covid-19? 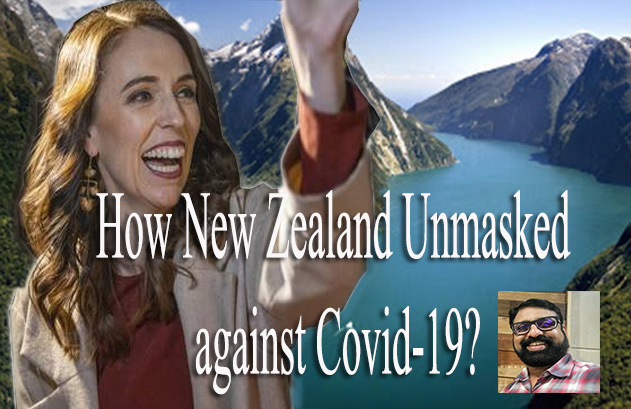 Jacinda Ardern again won the hearts of New Zealand and now the ceremonious Prime Minister of New Zealand. Her Landslide victory has proved the relevance of the missionary and visionary role of a leader rather than the ever-acclaimed political role. She has proved it during the fatal Covid-time and victoriously unmasked the whole New Zealand.

It was recently that the New Zealand Prime Minister Jacinda Ardern apologized over a mask-less selfie with supporters. Now the scene has changed. The country has lifted all pandemic restrictions and now back to normal. New Zealand at present is Unmasked. The country has now recorded only 1,827 confirmed Covid-19 cases and 25 deaths and authorities declared that everything is under control.

Now, Face masks are no longer mandatory on public transport in most of New Zealand, except in Auckland, the heart of a recent outbreak, and on planes. There was a safe time for the country about 3 months ago but an outbreak supposed to be the second wave of the pandemic hit the country and now almost survived. The government says that there is no evidence of community transmission.

The country, except the city, Auckland has returned to normal, means; no more social distancing mandatory on gatherings such as weddings or sporting events. All have returned to work without restriction and mask-wearing. However, the mask is mandatory for the passengers on planes flying to and fro, via Auckland and on all Air New Zealand flights.

The story of Covid-19 in New Zealand dates back to 2nd February 2020. A man in the Philippines became the first person outside China to die of Covid-19. Exactly at this point, there were no Covid cases reported in New Zealand, but the next day, the country began cautiously and started banning foreigner’s entry to the country from or via China. Besides, the New Zealanders returning from China have to isolate for 14 days as per the rules enforced by the country.

As New Zealand’s first Covid case reported later, unconditional restrictions imposed on anyone arriving from other countries especially the nearest accessible South Korea and northern Italy. Those showing Covid symptoms are strictly isolated. As things grew grave, from the midnight of 16th March 2020, every New Zealander has to go into self-isolation on arrival in the country, except those coming from the unaffected Pacific island nations.

The cautious and caliber-loaded Prime Minister Jacinda Ardern within no time has taken the unprecedented step of closing the borders of New Zealand entirely for almost all non-citizens or residents in order to stop the community transmission. Still, the country found it very difficult to control the pandemic and has taken drastic scientific measures towards the total elimination of the pandemic, the way China implemented it.

New Zealand’s own strategy of introducing the four-stage alert system equivalent to that of the wildfire alert was on March 2020 onwards. The Prime Minister Jacinda Ardern triggered a total nationwide lockdown, the strictest of its kind. Every New Zealander was nationally and emotionally locked in their houses for a decisive life-saving period for six weeks. There were protests and criticism from the opposition parties and from a minority people. But the ever-committed Jacinda Ardern neither compromised nor stepped back. She never believed in the unlock versions the world followed. At last, she and her country won the pandemic and globally applauded for the total elimination of the pandemic-A universal Dream.