Government has no hidden agenda; Opposition has. 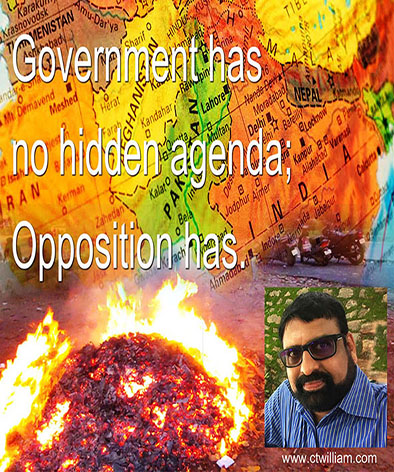 India is treading through precarious turbulence the kind that the country never had before. The reasons are being explored by the intelligentsia concerned and factually displayed before the public for massive endorsement. The majority of the said intelligentsia evidently cornered and witness-boxed the branded saffron army supposed to be headed by the Bharatiya Janata Party for they are behind all these existing problematic turbulence. The result; made India more confused, perplexed and problematically complex.

Actually what is happening in India? To be very much precise and frank, and if, this writer not being branded as the spokesman of the saffron army, I would like to say that the envious attitude of the political parties that are against the Hindus, creates these endless problems here. They fear that India in the future will be a Hindu Rashtra (State) with the continuous rule under the Bharatiya Janata Party. Yes, this fear smells sense and may happen in the future, if the other political parties are not well united democratically to encounter this deep-rooted communal political mechanism of the Bharatiya Janata Party. This is the fact and this is the only truth.

But at the same time, we should not forget the fact that India has voted twice for the Bharatiya Janata Party and the party has successfully completed its primary turn and now its second turn is on eventfully. Like every political party, Bharatiya Janata Party has its own specific election manifesto and solid ideology based on Hinduism. I do feel that the party has no hidden agenda but no doubt, it has its own crystal-clear agenda based on solid Hinduism. It’s a fact that the party is implementing their own election manifesto and their political ideology specifically the historic Ideology of Hinduism.

Politically or not, they are having the blessings from the judiciary and the electorate as well, and the things are moving quite satisfactorily and optimistically as per their visions and dreams. To accelerate the movement more speedy, the Indian electorates so far, are continuing their unconditional support to them. There might be political game and trading, as usual, that could be whistled as foul or un-parliamentary. But in politics, the end justifies the means, always. It is the global gospel where the art of politics is assessed and evaluated.

Recently they got Ayodhya back and they are planning to make it a historic monument. Demonetization and the process of digitalizing India, however, criticized, is their greatest leap into the Indian history. The political attachment over the detached Kashmir could be treated as their greatest achievement. The introduction of Goods and Service Tax (GST) has become another remarkable epoch in the Indian economy. The reformation in the banking sector has also appreciatively banked their credit substantially. The enactment of the bill on Muthalaq is definitely have adorned another colorful plume on their saffron crown. The reach of their saffron army beyond their boundary and aggression of the traditional electoral domain of the age-old political parties in India is their miraculous political achievement. The recent enactment of the bill on the Citizen Amendment is the other adventurous step to mark their mettle and militarism in the history of India. The political experts say, that some more unprecedented happenings are to come in the nearest future to ascertain their political supremacy in India, amidst innumerable political criticism and judicial allegations that are to be proved.

Whatever be the criticism; demonetization, digitalization, reformation in the banking industry and the introduction of Goods and Service Tax (GST) has brought a financial discipline in India. The parallel economy played under the shade of political parties were almost eliminated or curbed to a great extent. The people have zipped their wallet against un-necessary spending and un-zipped their purses only for essentialities. The online trading and services were encouraged and it helped the people greatly from being exploited by the bureaucracy, middle-men broking and liaising. It’s not fun to be shunned off, that the online taxi and food services have its tremendous effect on the automobile and hospitality industry as well. In my opinion, these economic reformations may be the reasons that worked on the graphic downwards of the Gross Domestic Product (GDP). Because our GDP might have been inflated by our earlier parallel economy, fake market, and pseudo trading that are supported and pampered by our earlier political parties. I hope that our Gross Domestic Product (GDP) will regain its strength in due course

While examining the massive criticism over the reformation process of the Bharatiya Janata Party, one could see that this criticism was mainly focussed on the saffronisation or the Hinduthwa agenda of the party. When we closely examine these criticisms, we could not find any convincing scientific observations behind these criticisms. In such contextual circumstances, we are forced to infer that all these criticism and political disturbances are due to the envious attitude of the political parties that are against Saffronisation or Hinduthwa. This has reflected in the reformatory phases of Demonetization, Digitalisation, Reformation in the banking industry, Goods and Service Tax (GST), Kashmir attachment, Muthalaq bill, and the recent Citizen Amendment Bill.