Explorations! Emperor Nero, Not a fiddler of destruction. 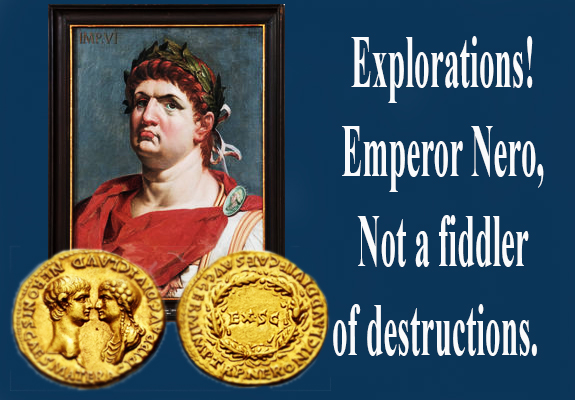 The controversial Emperor Nero is not at all the Emperor of Disasters. New research explorations by Caillan Davenport and Shushma Malik from the University of Queensland concluded.

Exceptionally empowered in A.D. 54 at the tender age of 16, Juvenile Emperor Nero allegedly murdered his two wives, his mother, and his aunt simultaneously married two different men and sleeping with his mother and a Vestal Virgin; so goes historic allegations.

Amidst these “Sexclusives” and murders the youthful emperor was always busy and supposed to have thrown Rome to fire and played the fiddle while the city was burning. The great historically popular Emperor then was immortalized in films and TV series such as Quo Vadis and I, Claudius and even branded as computer software Nero Burning ROM.

But research explorations by Caillan Davenport and Shushma Malik either confirmed or concluded that the ‘believe-it-or-not’ stories of burning the city to the love affair with his mother Agrippina are but rumors, rather than facts.

Most scholars along with Caillan Davenport and Shushma Malik now agree that Nero was not responsible for the fire.

Some sources derived that he was a mad megalomaniac to burn the city of Rome. But the story as narrated by Suetonius, the biographer of Nero proves it’s wrong. Because when a man said to Nero, ‘When I am dead, let the earth be consumed by fire’, the emperor replied, ‘No, while I live!’

Besides, the young Emperor Nero wanted to rebuild Rome according to his own plans, which included a sumptuous new residence for himself, the “Golden House” (Domus Aurea). This also supports that he never liked to burn the city of Rome.

On examining the historical accounts closely, we could conclude that the entire stories were the outcome of mere rumors and hearsay. According to the historian Tacitus, Nero was out of Rome when the fire started, and the rumor spread that the emperor had fiddled of the destruction of Troy from his palace.

The story of infatuation with his mother Agrippina was also a fabricated one. Generally the Roman people loved to speculate illicit stories about the emperors and their sex lives. One such story involves Nero and his mother being carried through Rome in a litter (a portable couch laid by curtains), only for the emperor to emerge with suspicious stains on his clothes. But the people started to whisper badly that the imperial pair had been doing more than reviewing imperial legislation behind the curtains.

The unusual political situation of the time has also brightened the flames of roumours. Nero was only 16 when he was the acclaimed emperor, and his mother Agrippina asserted herself as the emperor’s guardian by appointing men loyal to her in key positions. Her extraordinary influence is demonstrated by contemporary coins with busts of both the emperor and his mother on the “heads” side. This coin made Agrippina look like she was Nero’s equal.

Agrippina’s unprecedented and unquestionable position was also been the subject of continual speculation throughout Roman public. According to Cassius Dio, the Roman public could not obtain accurate information about affairs inside the palace. Without such accurate and reliable information, they spread rumours based on cultural preconceptions. In the Roman world, it was believed that a woman could not exert political power unless it was gained by underhanded or immoral means.

The rumours had also served a political purpose. An emperor’s sex life at that time was not simply juicy gossip for the masses but also to reflect the character of his government. Rumours, even if ultimately untrue, helped to define the expectations of a good emperor in the minds of the public.

The research however disproves a historic fact and proves an Emperor innocent who was chased by roumours.