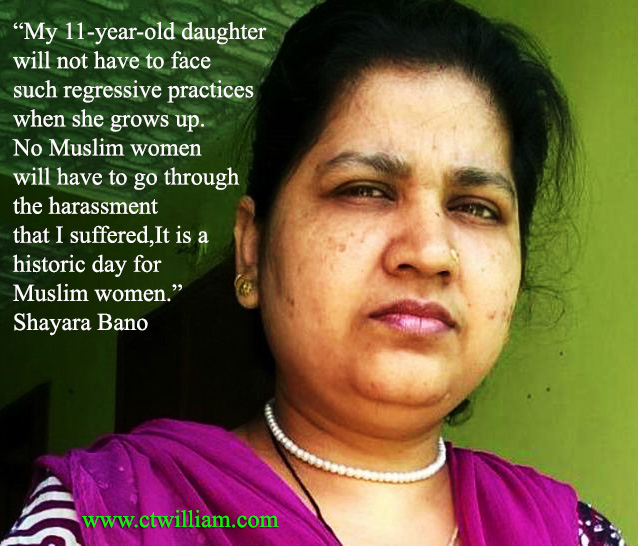 After a most crucial and tumultuous journey, Shayara Bano, the 35 year old Muslim woman from the remote hamlet of Uttarakhand will enjoy a deep comfortable sigh for the entire world of Muslim woman. The honourable Supreme Court has heard her say and declared a historic judgment against the practice of talaq:-

“A perusal of the consideration recorded by us reveals that the practice of ‘talaq-e-biddat’ has been done away with, by way of legislation in a large number of egalitarian States, with sizeable Muslim population and even by theocratic Islamic States. Even the AIMPLB (All India Muslim Personal Law Board), the main contestant of the petitioners’ prayers, whilst accepting the position canvassed on behalf of the petitioners, assumed the position that it was not within the realm of judicial discretion, to set aside a matter of faith and religion. ”

She had heard the diabolic reverberations, Talaq…Talaq…..Talaq…..in 2015 that has ended up her marital life started in 2002 with Rizwan Ahmed and simultaneously began her martial life to put an end to the age-old practice of annihilating the lives of many Muslim women.

She has lost her two children Irfan, and Muskan during this terrible phase of her journey and she was being attacked by the communities and the clerics for her soul-forced battle against the heartless Muslim establishment. She has lost her hometown and forced to lead the life of an exile that sentenced for imprisonment of dead solitude.

But on 22nd September 2017 she was freed from all her invisible entanglements and she heard the real prophet’s voice that has trumpeted to the whole world, that her fragile community was also set freed from the satanic strangulating grips. Shayara Bano has become history.

Following the re-born prophet she has ignited an outcry to the world, “My 11-year-old daughter will not have to face such regressive practices when she grows up. No Muslim women will have to go through the harassment that I suffered; it is a historic day for Muslim women.”

Amita Basu, Amnesty International India, immediately responded; “We welcome the Supreme Court judgment. Tripple talaq is a discriminatory practice that violates women’s equality, and has devastated the lives of many Muslim women.”

But we the Indians have to realize the ground realities of the communal India, political India and the India that is having a most flexible constitution that had been ultimately scribbled by the British. In such grave context, we have to suspect the execution of the judgment of the Apex Court. Farha Faiz, Supreme Court Lawyer, has said it in the right manner as follows:-

“The judgement is favourable but the government needs to implement a concrete law to lay down the punishment that will be handed out to the offenders. Unless that is in place, I consider this a ‘half-victory’. The law should be framed without any interference of political ideologies and must take effect urgently.”

Hope that the mission of Shayara Bano is over and it is learned that she will move to the Moradabad University to continue her second Master’s in Business Administration. The court room will again be in session and we all have to observe silence again.