A tale of suicide and polygamy 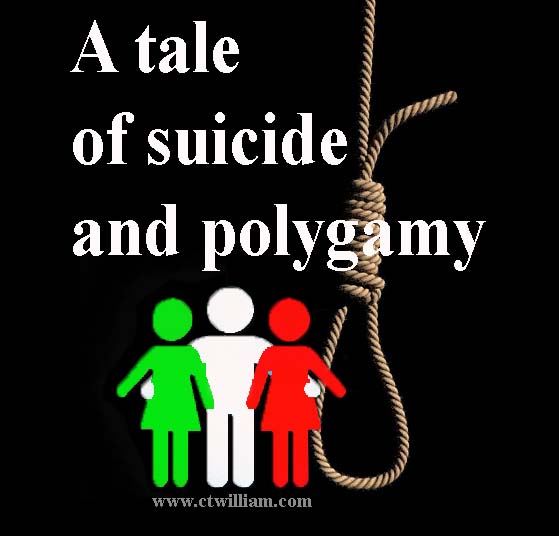 The Kerala politics especially that of CPIM is having very much difficult times and tight turns. The suicide of the expatriate entrepreneur Mr Sajan and the polygamy of Mr Binoy Kodiyeri are the two incidents that have made the party to pause before the gun point of the political moralists. But I don’t find anything remarkable relevant in these incidents. Because these incidents are happening all over the country irrespective of geography and genre of the political parties. These are but historical repeats as universal and as deserved to the people who sacredly consecrated their deserving government.

In my opinion the expatriate Mr Sajan has committed suicide due to his political as well as management ignorance. Every entrepreneur whether he is an expatriate or not should have done preliminary and essential exercises and project analysis before leaping into any ventures. Everybody knows the fact that Kerala is not at all combatable for any ventures as the country severely lacks entrepreneurial or industrial climate. This gravity of the unfavourable climate will be terrific if the state is ruled by the left front. Mr Sajan would have seen the Malayalam film Varavelppu and he would not have committed this industrial foolery.

It was due to this unfavourable entrepreneurial or industrial climate, entrepreneurs are keeping far away from Kerala for making any investments. Here in Kerala all investments are directly or indirectly connected with the political parties and their nexus. The modern investor therefore should find a dominant space for the role and play of these political parties and their nexus while drafting the project report and its analysis. Mr Sajan have terrifically failed in his attempt of foreseeing such political calamities; hence committed suicide. This is the truth. This is the fact.

The funniest side of these incidents is that the media is pumping fuel to burn these issues not for any democratic solutions, but for the marketing solutions of the media companies. The issue being sensitive and made over-sensitive by the media itself, the people are widely supporting the marketable stuff and it has ballooned their rating. The media being the tamed monkeys played according to the magic wand of the politicians, corporates and the bureaucrats, the monkey’s play are running lucratively. Such games and gimmicks of the political parties, government and media will continue endlessly upon the encouragement of the stereotype human race.

Our society is fully contaminated by all means. A total revolution could only cleanse it. But I could not find any traces of the spirit of revolution in the current stereotypic human race and even the hopeless posterity. And that’s the diabolic Bermuda in which we are trapped.