A blood test to detect Dementia: No more Rameshan Nair 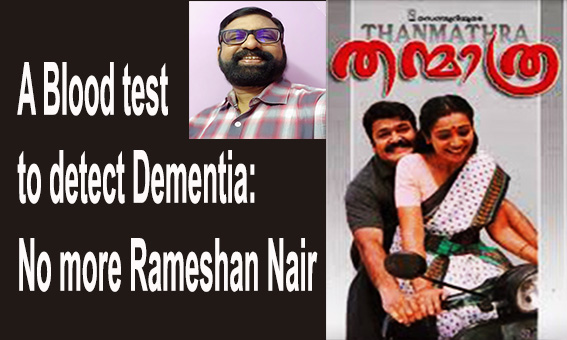 No one would have forgotten the moving story of Rameshan Nair, the Kerala Government’s Secretariat employee.  Rameshan Nair has lost his memory at the robust and happiest stage of his life and fallen into the terrific hands of Dementia or Familial Alzheimer’s disease. Mohanlal, the blessed artist has played the role of Rameshan Nair, the immortal character depictured by the Story Writer, Padmarajan won the heart and soul of the world under the blessing film director, Blessy.

Now the Scientists from the US and Sweden have found a revolutionary model of a blood test to spot Alzheimer’s disease at the earlier stage and years before the symptoms appear. The gravity of the Alzheimer’s disease is measured by identifying the presence of the protein, p-tau217 in the patient. The blood test now found could trace out the accurate measure of the protein, p-tau217 in the patient. This will help the doctors greatly to diagnose the case perfectly and give treatments effectively.

At present, the disease is diagnosed using a combination of memory tests and brain scans. This is a challenging diagnostic method and also a complicated time-consuming one. The experts say, earlier the diagnosis better will be the treatment of this disease. The new blood test will be an answer to this.

The concept of a dementia blood test is not new, but the latest study gives the clearest indication that a protein, p-tau217 associated with Alzheimer’s disease could be traced out earlier and accurately. The challenge and complications with this disease are that the detection of the disease is much delayed and the stage might have worsened due to irreparable damage to the brain cells. Actually, the Protein, p-tau217 build up in the brain causes the brain cells to die.

The US team at Washington University School of Medicine found the presence of the protein, p-tau217 in the blood gave them a clear picture of a patient’s condition. They were able to observe the elevated levels of p-tau217 protein in the minimum of 4ml of blood. The team had shown the protein could be detected in the brain and spinal cord fluid of Alzheimer’s patients before they develop symptoms.

The research team at Lund University in Sweden found that people with Alzheimer’s had about seven times as much of p-tau217 as people without Alzheimer’s. The team also proved that this could be found as much as 20 years before they develop the symptoms.

With this revolutionary blood test, we may expect that no more Rameshan Nair will happen in this world to be the crucial tragedies of Dementia or Alzheimer’s disease.