3D Printable Ghost Guns: The bell that cannot be un-rung 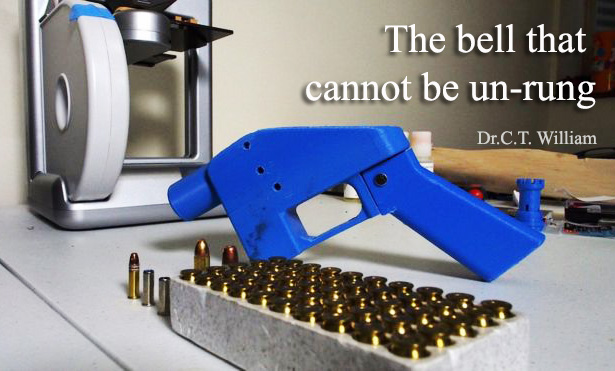 At last Robert Lasnik Judge and saviour of mankind in Seattle has blocked the production of 3D Plastic Guns and the release of software that allows people to obtain the solid print outs of 3D-print firearms.

The US District Judge Robert Lasnik issued a temporary restraining order blocking the release of 3D Guns hours before its proposed release on 1 August 2018. Robert Lasnik judged that the blueprints of 3D Guns could fall into the wrong hands and will be a public threat. These plastic guns raised great concern over its easiness to sneak past metal detectors. In 2013, Israeli journalists were able to smuggle a 3D-printed gun based on Defence Distributed blueprints into the country’s parliament.

It was in 2013 Mr Wilson, a self-styled crypto-anarchist, demonstrated the world’s first 3D-printed gun in the public and made available immediately on the Defence Distributed website and people downloaded the same hundreds of thousands of times. Later on it forced the US State Department to remove the software from the internet. Advanced 3D-printing technology have made it feasible to create gun parts using a simple set-up: a mill or plastic printer ported up to a computer.

Afterwards a four-year long legal battle was staged with the Defence Distributed joining forces defending the right to own guns and thereby to sue the State Department. As a result, last month, in a surprise move, the case was won and the US Justice Department issued a ruling that Americans may “access, discuss, use and reproduce” the technical data. Mr Wilson hailed this victory as the beginning of “the age of the downloadable gun”. Mr Wilson’s company has also developed a new printer model which even allows gunsmiths to create aluminium objects from digital files and this will lead to printable metallic guns.

The 3D Gun promoting firm reached a settlement with the Trump administration in June to allow it to legally publish the instructions and to release Ghost Gun on 1 August 2018.

But eight states named New York, New Jersey, Massachusetts, Connecticut, Pennsylvania, Oregon, Maryland including District of Columbia strongly argued that the Ghost Guns are untraceable and it will create safety risk to the nation; hence the same blocked. 20 other state attorneys general have also written to the State Department and Department of Justice to block the Ghost Gun. The lawsuit against the Trump administration was filed in Seattle, Washington, by the state’s Attorney General Bob Ferguson. The complaint calls the 1 Aug release of Ghost Guns “a bell that cannot be un-rung”. US District Judge Robert Lasnik heard and honoured their argument and the Ghost Guns are temporary restrained. The case will be further heard on 10 August 208.

After hearing the Lasnik’s judgement, Bob Ferguson responded that the judgement is a “complete, total victory”.

In the midst of these proceedings, more than 1,000 people have downloaded the files for building an AR-15 rifle; the same gun said to be used in many of America’s mass shootings recently. These guns have no serial number and are illegal to buy or sell, but making one is still legal. The Ghost Guns reportedly costs under $1,500, and is already sold out for 2018. A $250 deposit reserves a place on the list for the next batch of machines.

The president however had tweeted without much clarity that selling of 3D guns to the public “doesn’t seem to make much sense” after settling with Defence Distributed in June.